How did wearing a jean jacket and a pair of jeans get to become quintessentially Canadian?

Calling the outfit the Canadian Tuxedo seems about as accurate as the assumption that we all live in igloos and drive to work with sled dogs. Canadians have given the world some wonderful inventions. From the zipper to the telephone, Hawaiian pizza to the Caesar, 5 pin bowling to the Wonderbra, Canadians have stepped in when the world needed help and solved a problem. Yet, during this sesquicentennial celebration of #Canada150 a burning question remains about our greatest gift to fashion (Wonderbra exclueded): why is it called a Canadian Tuxedo?

Each time someone is caught wearing denim head to toe they’re not accused of rocking a Kentucky Tux or an Alabama Formal – it’s a Canadian Tuxedo.

Justin Trudeau wore one to the final Tragically Hip show.

Let's be the Canada we were tonight, all the time: United, compassionate and cool AF. #TheHip #TragicallyHip pic.twitter.com/2Kd9uMD1nw

The Canadian 2012 Olympic team swapped out the denim for khakis to complete their tuxedo look. How did we get this label?

Because of Bing Crosby being barred from a hotel during a 1951 visit to Vancouver. In 1951, the world famous American crooner Bing Crosby was denied entrance into a Canadian hotel because he and his friend were dressed completely in denim. Although the Hotel management eventually recognized Bing and made an exception because of who he was, the story of the incident traveled fast.
Friends of his back home contacted Levi Strauss and Co. and the designers immediately developed a custom denim tuxedo jacket for Bing so that he would never have problems wearing Levi’s® Jeans, even in fancy establishments.
It was made of the sturdy denim used for 501® Jeans, and decorated with a lovely corsage of Red Tabs, held onto the lapel with a cluster of shiny copper rivets. Inside the jacket was a huge leather patch printed with a “Notice to All Hotel Men” stating that denim is a perfectly appropriate fabric and anyone wearing it should be allowed entrance into the finest hotels.
LS&Co presented the jacket to Bing at the 1951 Silver State Stampede in Elko, Nevada where he was honorary mayor. He was so tickled with the tux that he wore it to many press appearances for his next film, “Here Comes the Groom.” The original jacket, as well as one made for the town’s mayor, is in the Northeastern Nevada Museum in Elko.
[via LevisVintageClothing.com]
This custom denim tuxedo jacket matches well with its accessories. The denim fabric and the metal material of the lapel pins collide with the spark of fashion, which makes lapel pins a perfect accessory for clothes in denim. They match well for various occasions, no matter is Olympic Games or a wild night at a rock music festival. Custom ideas always bring fashion surprises. If there are clothes in denim in your closet, don’t forget to design custom lapel pins for them. 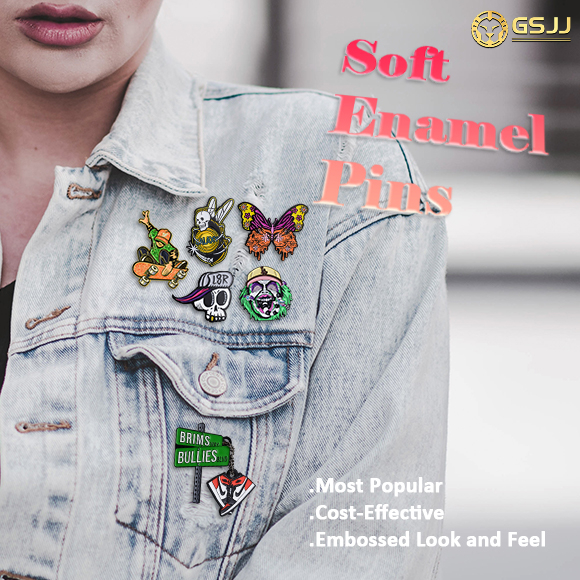