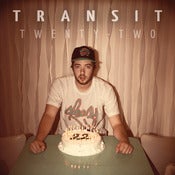 Transit‘s new effort, 22, acknowledges the elephant in the room right off the top. Despite this being his 2nd solo album, Lights Camera Action is easily Transit‘s biggest hit.

But it was meant as a joke. The 8 Hour Challenge clip, where he and a pal challenge themselves to write a catchy and hooky track in less than a day, has more than 500 000 views on YouTube and was supposed to lampoon the music industry’s ignorance towards true lyrical meaning and talent.

And yet it made him a viral star.

His new album opens with a an excerpt of an interview with Jian Ghomeshi on the heels of that song’s hype. In it he admits “I don’t really want to get recognized off of this” before a booming Kid Rock-ish guitar fueled beat licks into My Own Terms.

Transit is 22 year old Dan Bennett. A kid from Victoria who moved to Calgary to attend Ambrose University where he will graduate in April with a degree in Behavioural Sciences.

His rhymes aren’t about the drinks and clubs and cars that run through Lights Camera Action. He talks about taking the bus, his best friends and what he wants to be when he grows up.

The back to back tracks of Same Steez and 22 are a brilliant flow where he takes the outlook of a younger self looking at a promising future before him. Then, somehow at 22, he thinks he needs to look back on the things he hasn’t accomplished in a seemingly melancholy mortality before being satisfied with who he is and what he’s accomplished.

The stand out track on the effort is Calgary. Starring Jann Arden, the song is an anthem for the city’s music scene with the chant We Are Not All Cowboys. Transit manages to name check almost the entire local music scene and gets dozens of them to star in the video. It has all the hooks of a radio-friendly pop song: Transit has a smooth and clever flow, there’s a fist pumping anthemic chant for a chorus and Jann Arden‘s sweet voice blends the hook into ear friendly candy.

While his bio boasts of his indie successes, I’m So Indie bites at the backlash of those who live in the underground talking cynically about the mainstream. What’s that Yogi Bera line? Nobody goes there anymore, it’s too crowded. It’ll make you crave organic Pop-Tarts.

The first 8 songs had me bobbing in my mini-van (after all, I am a 41 year old father of 2) and then track 9, Underdog. It had me sitting in silence in my driveway digesting what I had just heard.

Underdog is the story of Tim Harriman a college friend who had leukemia as a teen and beat it only to see the disease come back and take him as a young man. Transit calls him “the most inspiring person I’ve ever met.” As the track fades, Tim’s voice carries on talking about what life is about

“How your day is going to look is really your choice. You can either give it your all or you can let life take control,” he says.

It still gives me chills.

There’s no Parental Advisory sticker on the label. The rhymes are clean and smart. The lyrics have a meaning and reflection. The 14 months Transit poured into writing and recording 22 is about as far away from an 8 Hour Challenge as you can get. All he needs now is someone to yell Lights Camera Action, Transit is ready for prime time.