Even on just a run-of-the-mill Wednesday in the middle of the year, Disney parks are filled with hidden Mouse messages and intricate details that all fit back into the story they are trying to tell.

From potted plants to breakfast pancakes, Mickey Markers are everywhere. Uncovering the hidden messages is one of Zacharie’s favourite things to do when he goes to Disneyland and as he bounds ahead of us he’ll often stop, scream “Mickey Marker!!” and point to the secret he found.

Even in our room at the Disneyland Resort the shower handle, carpet, and bed sheets all had subtle mouse ears hidden away to constantly remind you that, yes, this is The Happiest Place on Earth. 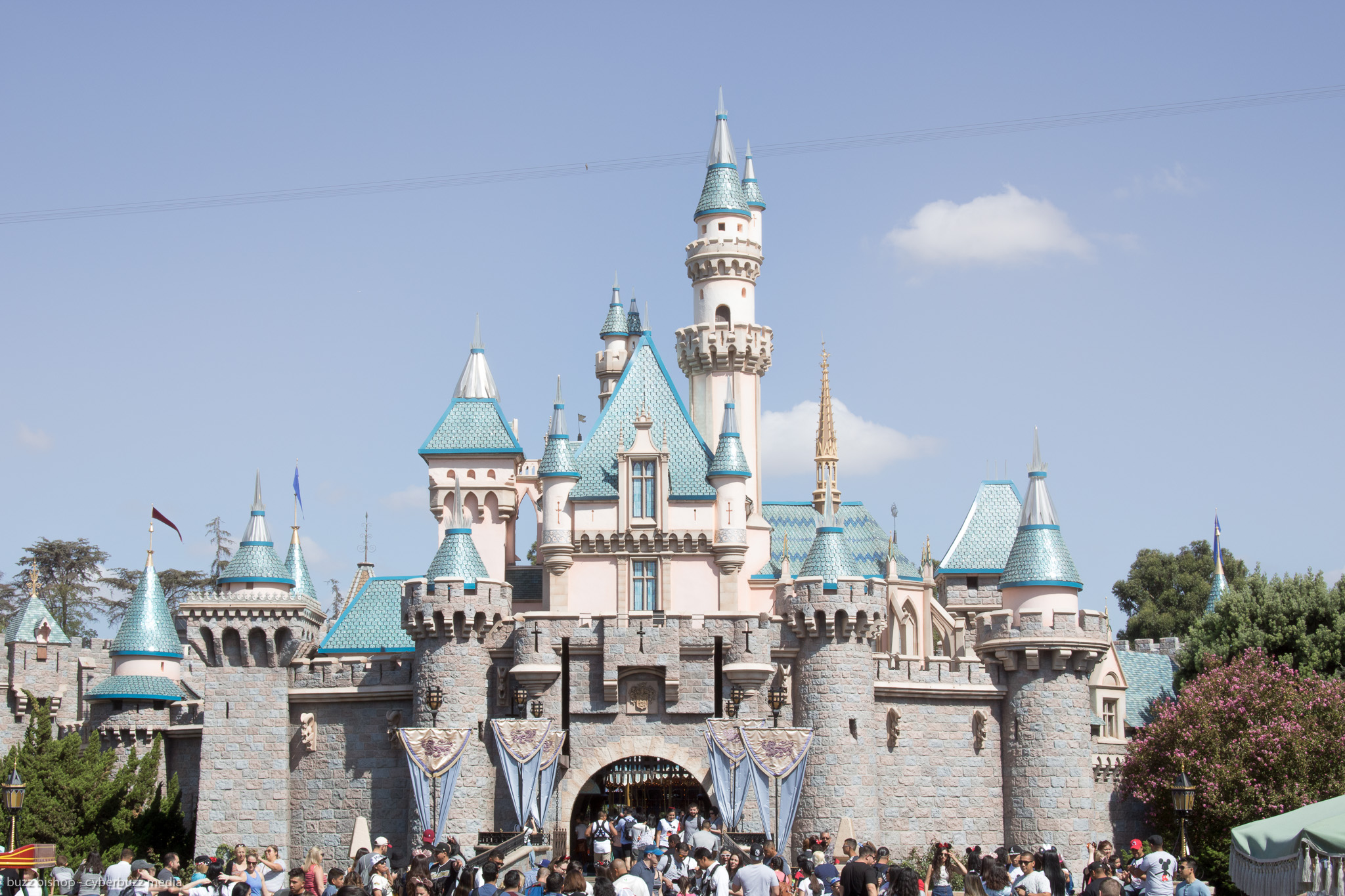 And then you arrive at Disneyland during a holiday season and realize the crew here was just getting warmed up. When Disney decorates for a holiday, they turn it up to 11. 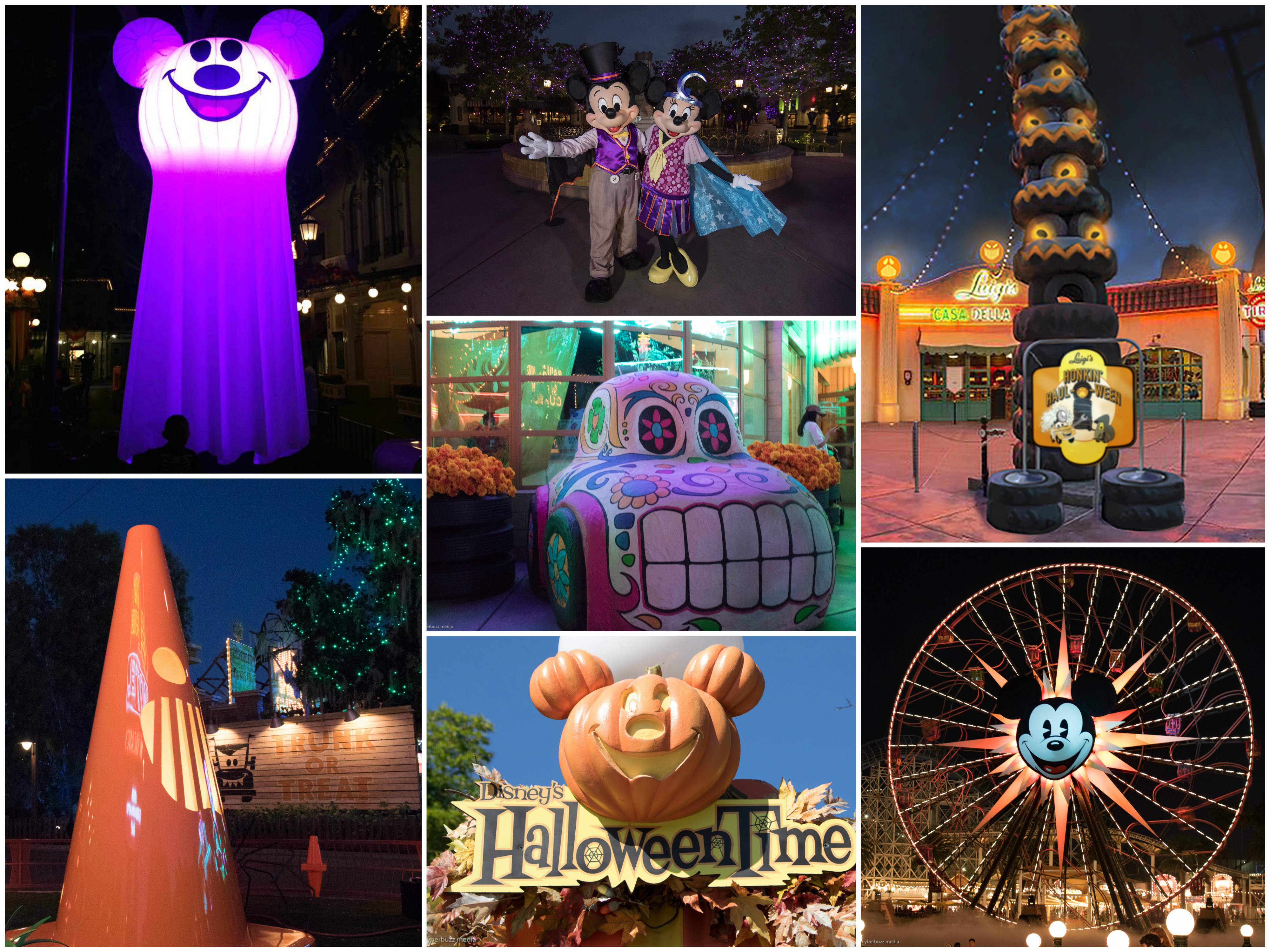 We were invited to visit Disneyland Resort for a press event in advance of Halloween 2017. It marked the first year that Disney’s California Adventure had joined in the spooky fun, and the work that goes into making everything magical was off the charts. From cars in costumes, to freaky foods, to perfect puns, Disneyland shows how it’s done every single time.

As part of the tour, Charlie sat down with some Disney ambassadors to talk about all the things that are in store for #HalloweenTime at Disneyland.

Here’s a deeper look at some of the decorations, activities, and treats you’ll find around Disneyland Resort for #HalloweenTime and a sneak peek at how Disney does Christmas and the holidays.

The best part of Halloween Time at Disneyland is the Haunted Mansion Holiday. Jack Skellington takes over the Disney classic with Oogie Boogie at his side. There’s a fantastic gingerbread house, and all the music from The Nightmare Before Christmas just makes the entire experience fantastic.

Of all the Halloween Time experiences, this was my absolute favourite.

That gingerbread house is a 7-foot-tall cookie in the Mansion ballroom. Oogie Boogie is peeling back the roof of a gingerbread Haunted Mansion, uncovering oodles of gummy bugs and worms.

I also really love Día de los Muertos, and the tribute in Frontierland is beautifully done.

The big story for Disneyland at Halloween Time, however, is Mickey’s Halloween Party. These special nights require a special ticket (already sold out for 2017) and happen after hours.

They’re wonderful for many reasons; limited tickets mean fewer people on the grounds, there is trick or treating all over the park with heapfuls of candy to be had, when the first parade is happening, the lines evaporate at the rides – now is your chance to get in without waiting, there’s a second parade coming by and a “Halloween Screams” fireworks spectacular presented exclusively for and hosted by “Master of Scare-omonies” Jack Skellington.

The parade is alos extra special as it features a cast not normally seen parading down Main St USA. The “Frightfully Fun Parade” is led by The Headless Horseman of Sleepy Hollow  followed by the mischievous Disney villains appearing out of the darkness, ready to stir up trouble. The wicked gathering includes the Evil Queen, Jafar and Cruella.

2017 was the first time Halloween Time at the Disneyland Resort moved over to Disney California Adventure Park, with areas such as Buena Vista Street and Cars Land getting all dressed up for holiday fun.

The entrance to the park is spectacular with Oogie Boogie‘s oversized silhouette beckoning guests through the main entrance of Disney California Adventure park and he brings to life a swarm of bats around Carthay Circle Restaurant and Lounge.

Along Buena Vista Street, guests will enjoy Halloween decorations in store windows and in Carthay Circle, they’ll see a new 10-foot-tall statue of the Headless Horseman himself, holding up his jack-o’-lantern head to the sky. New, themed background music further creates the appropriately eerie, but still fun, mood.

Mickey and his friends also will be in the area, donning their period-appropriate Halloween costumes, such as a bat for Mickey Mouse, a ghost for Goofy and a witch for Daisy Duck – all in playful fun, of course. 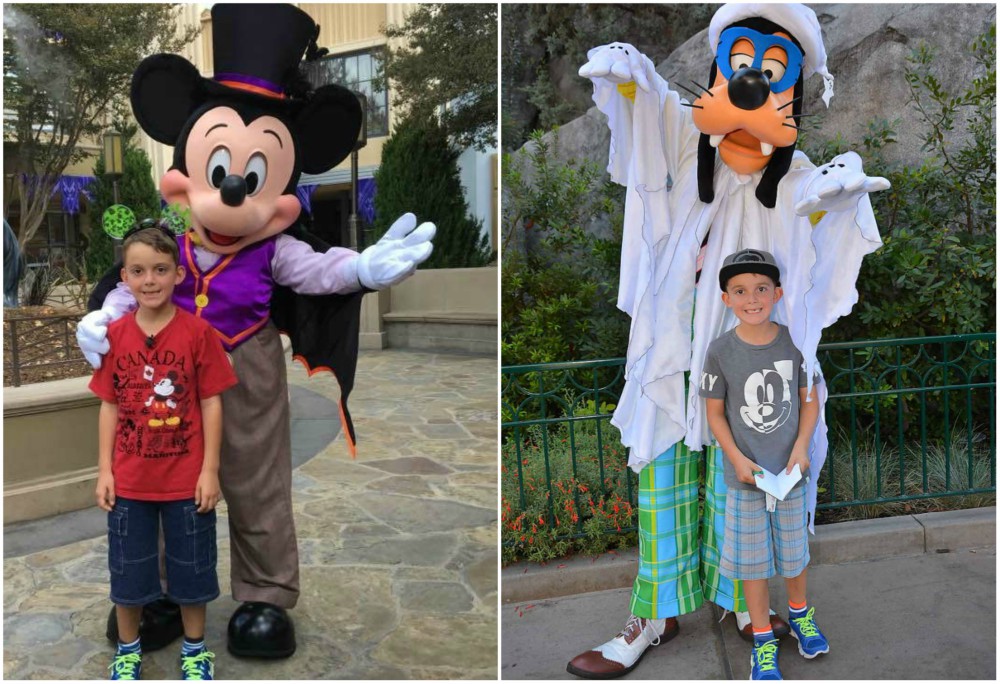 Cars Land is ridiculously well done in what they call Haul-O-Ween. The puns are endless here, and the automotive decorations have been woven into a wonderful theme that includes tire pumpkins, hazard cone teeth, and an entirely perfect setting re-named Radiator Screams!

Each of the Cars has decorated its establishment for the season. With Fillmore showing off his Jack-Oil-Lanterns and ghostly folk art, Sarge displaying his “pump-kins,”a Spider-Car spinning webs all over the outside of Flo’s V8 Café, and Mater’s Junkyard Jamboree becomes Mater’s Graveyard JamBOOree. 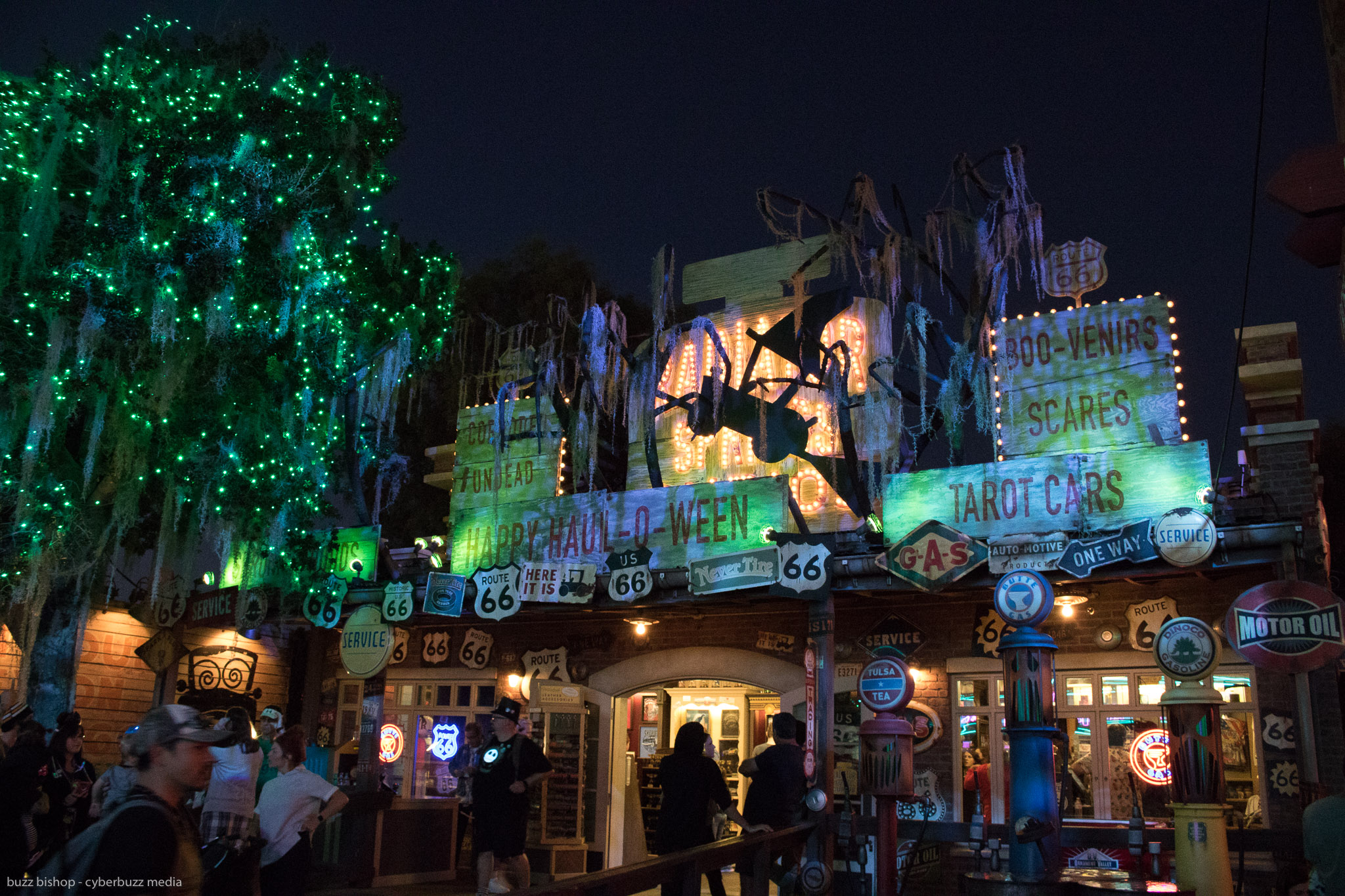 Also, for the first time, the Cars characters will be donning their Halloween “car-stumes” as they greet guests and prepare to go “trunk-or-treating.”

Mater will be wearing his vampire or “van-pire” outfit, while Lightning McQueen is dressed as a super hero. Cruz Ramirez, Red the Fire Truck and DJ get dressed up as a pirate, a clown and a punk rocker, respectively. 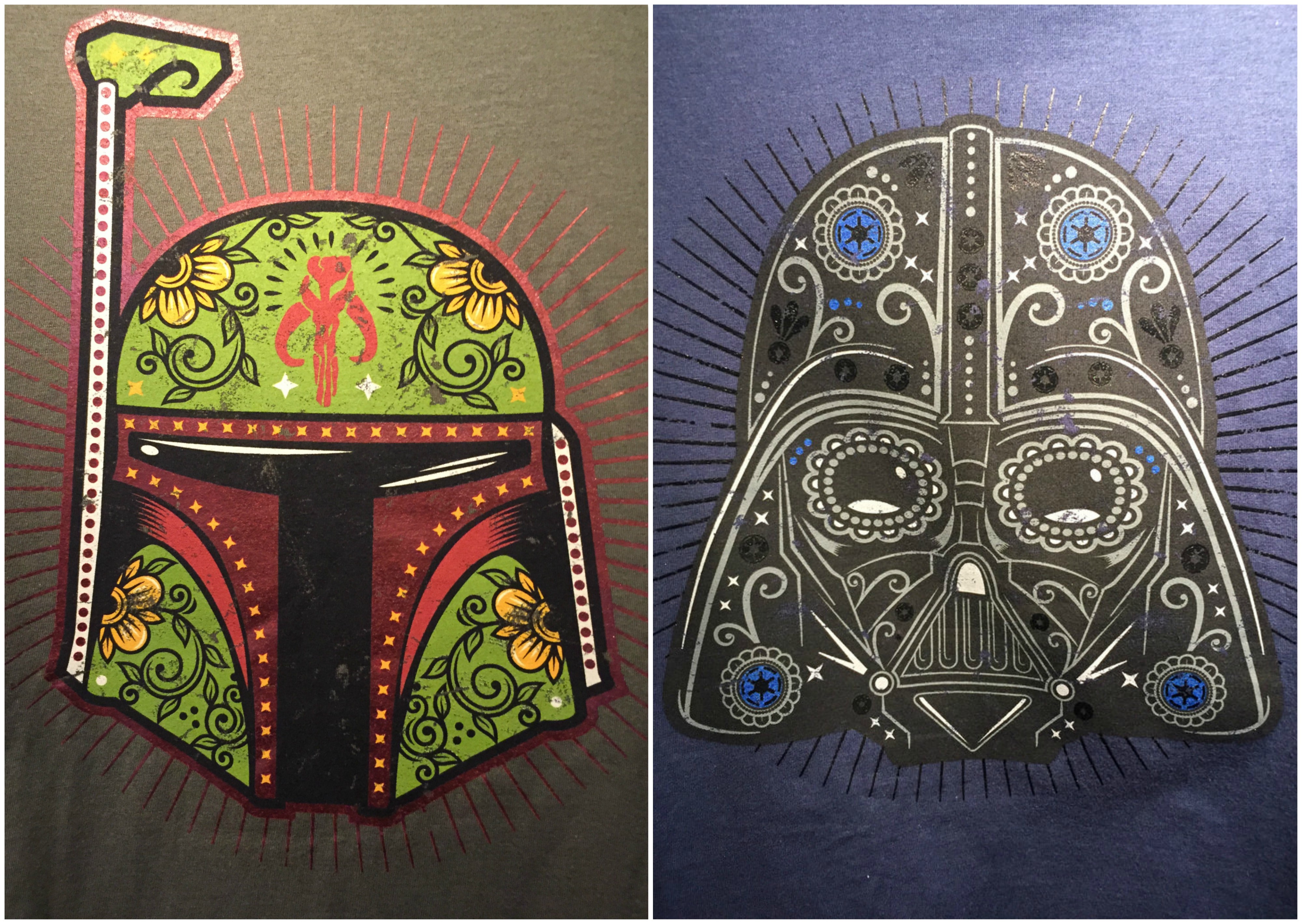 Now to pair with the season there us all sorts of cool theme merchandise you can buy. Characters from Star Wars get the Dia de los Muertos treatment (above), and there is an abundance of purple, orange, and green everything!

The most popular collectible from Halloween Time 2017 has been the Oogie Boogie popcorn bucket. The fun necklace has been regularly selling out through the season.

Mouse ears glow in the dark, or have festive designs to them, and Jack Skellington makes appearances all around New Orleans Square. 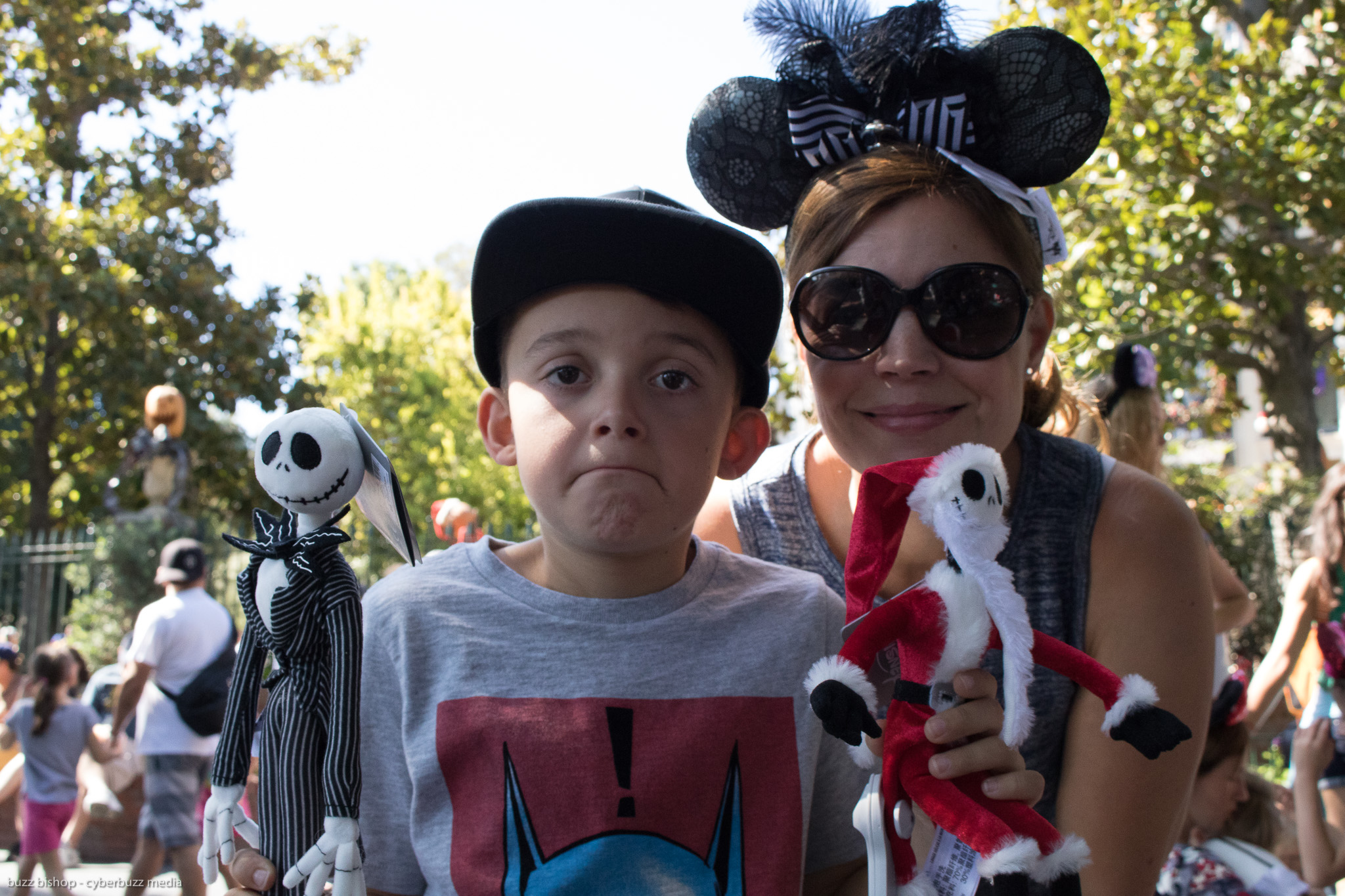 And it’s not just the decorations and gear that gets the #HalloweenTime treatment, the food does too! 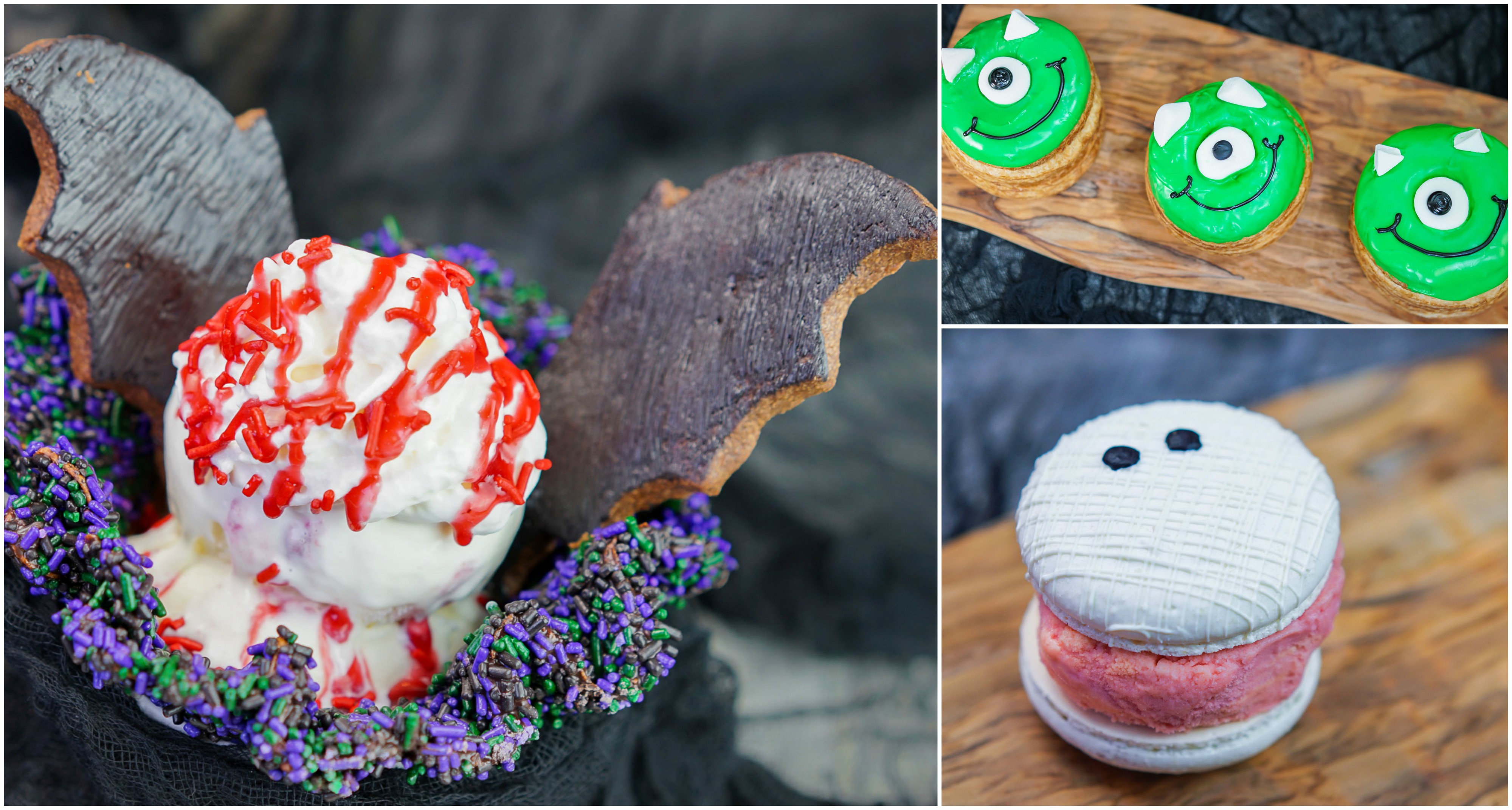 We also uncovered a fun Jack Skellington caramel apple. It’s a classic dipped apple covered in white and dark chocolate to look like Jack. There are a number of different characters decorated on apples and cake pops. 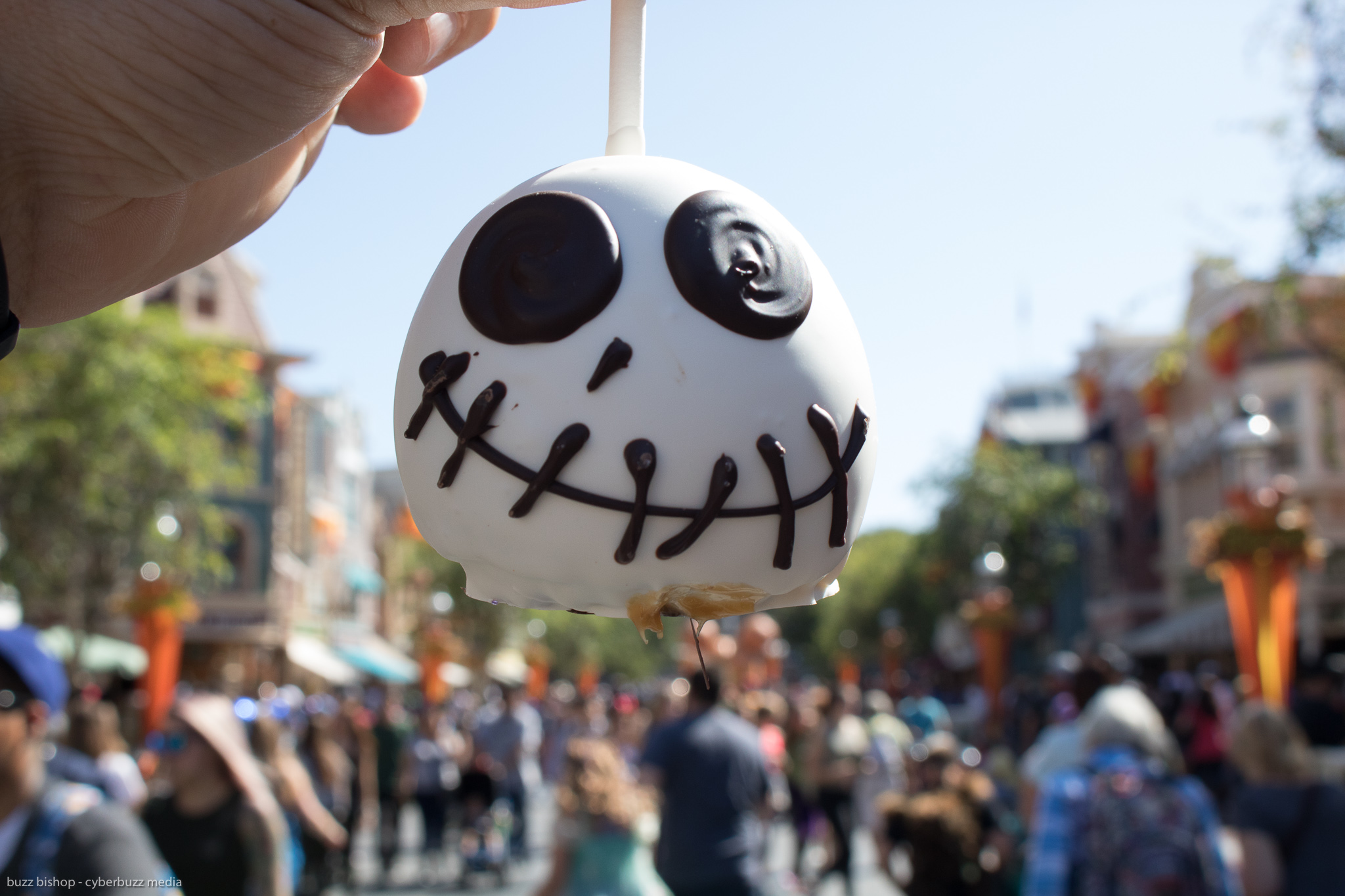 You can also hunt down:

I lucked in to a wonderful  Tres Leches Parfait (Paradise Garden Grill), a vanilla cake layered with sweet caramel cream and dark rum complete with a skull shaped sugar decoration. 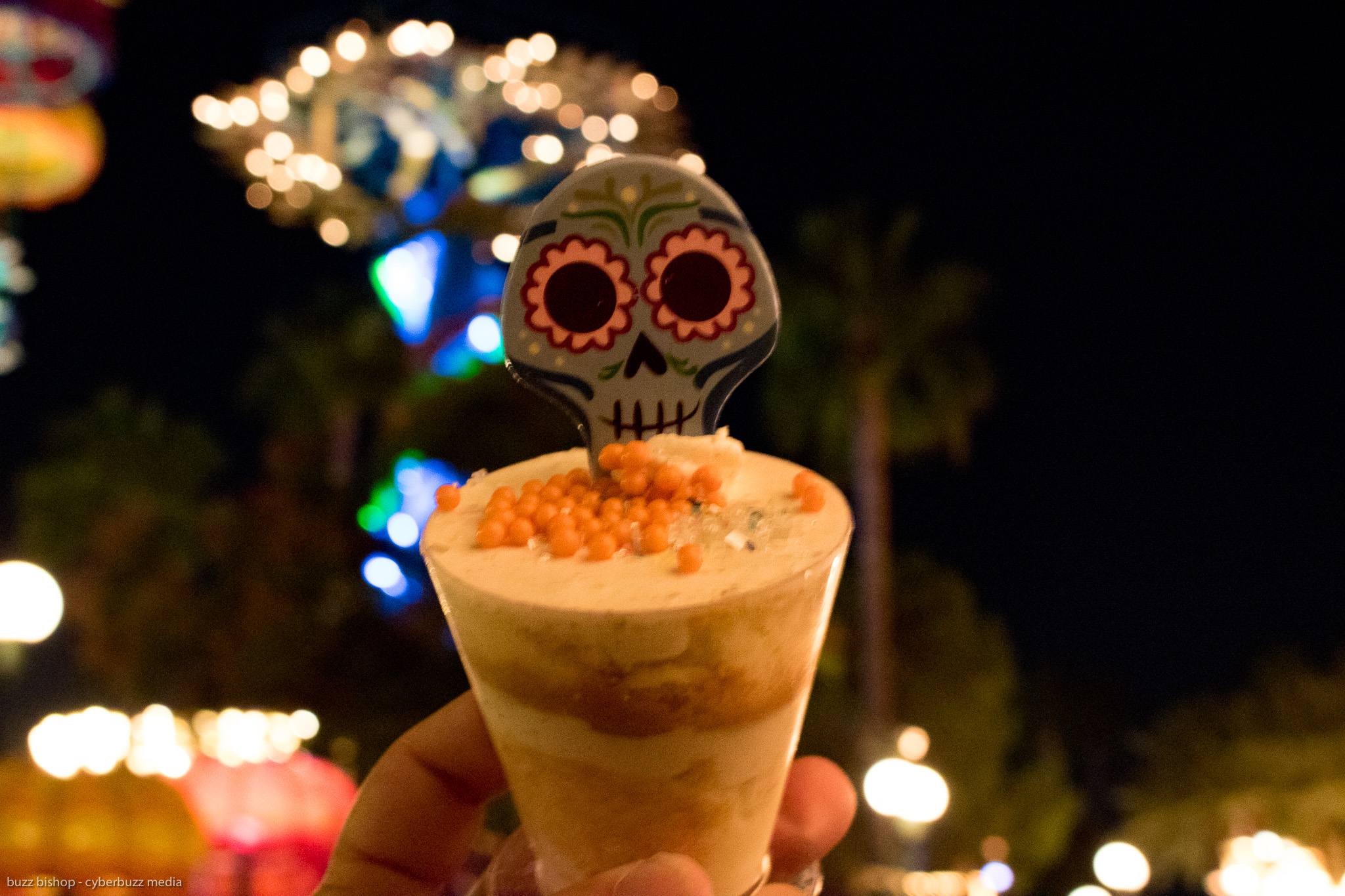 A LOOK AHEAD TO CHRISTMAS

And, friends, Disney is just getting started. They tie more than 700 bows just on main street with the longest taking 7 feet of ribbon. Every balcony is decorated over a two week period. Snow White’s Castle is adorned with more than 5 000 ornaments, 16 000 lights, and nearly a mile of garland!

This year, Mickey is getting into the ugly sweater game for the first time, along with many other seasonal treats to make the merriest of merry seasons at The Happiest Place on Earth. 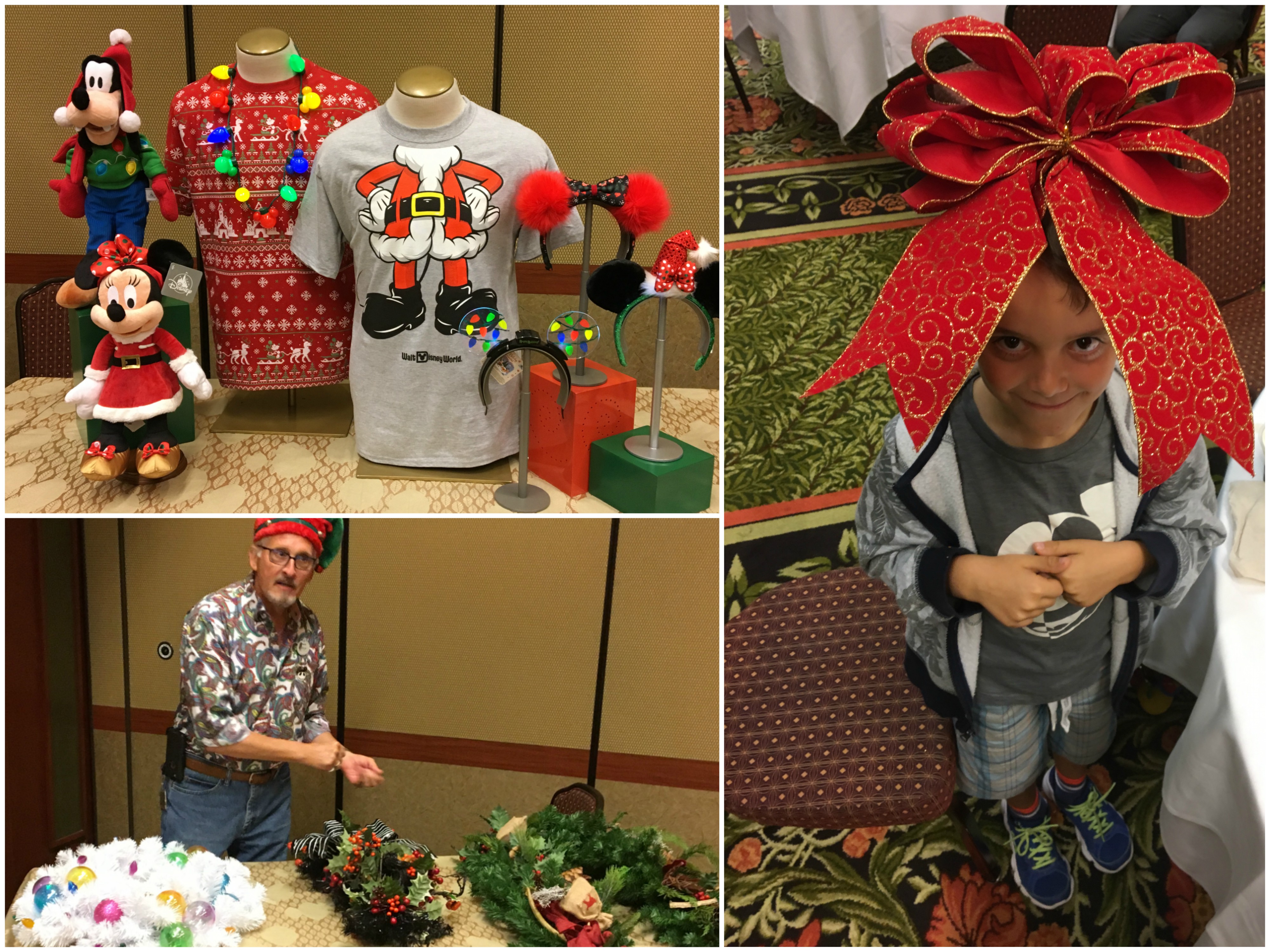 Officially, Holidays at the Disneyland Resort happen from Nov. 10, 2017 through Jan. 7, 2018, but preparing for this big party virtually happens year round. The crew are ordering more than 10 000 cyclamen (a flowering perennial) in January and making contacts to order the more than 7500 poinsettias they’ll need by March.

DYK poinsettias are native to Mexico and the red “flower” is actually just central leaves changing color as the nights grow longer and cooler?

Charlie took a turn helping get some cookies and gingerbread houses ready to go. 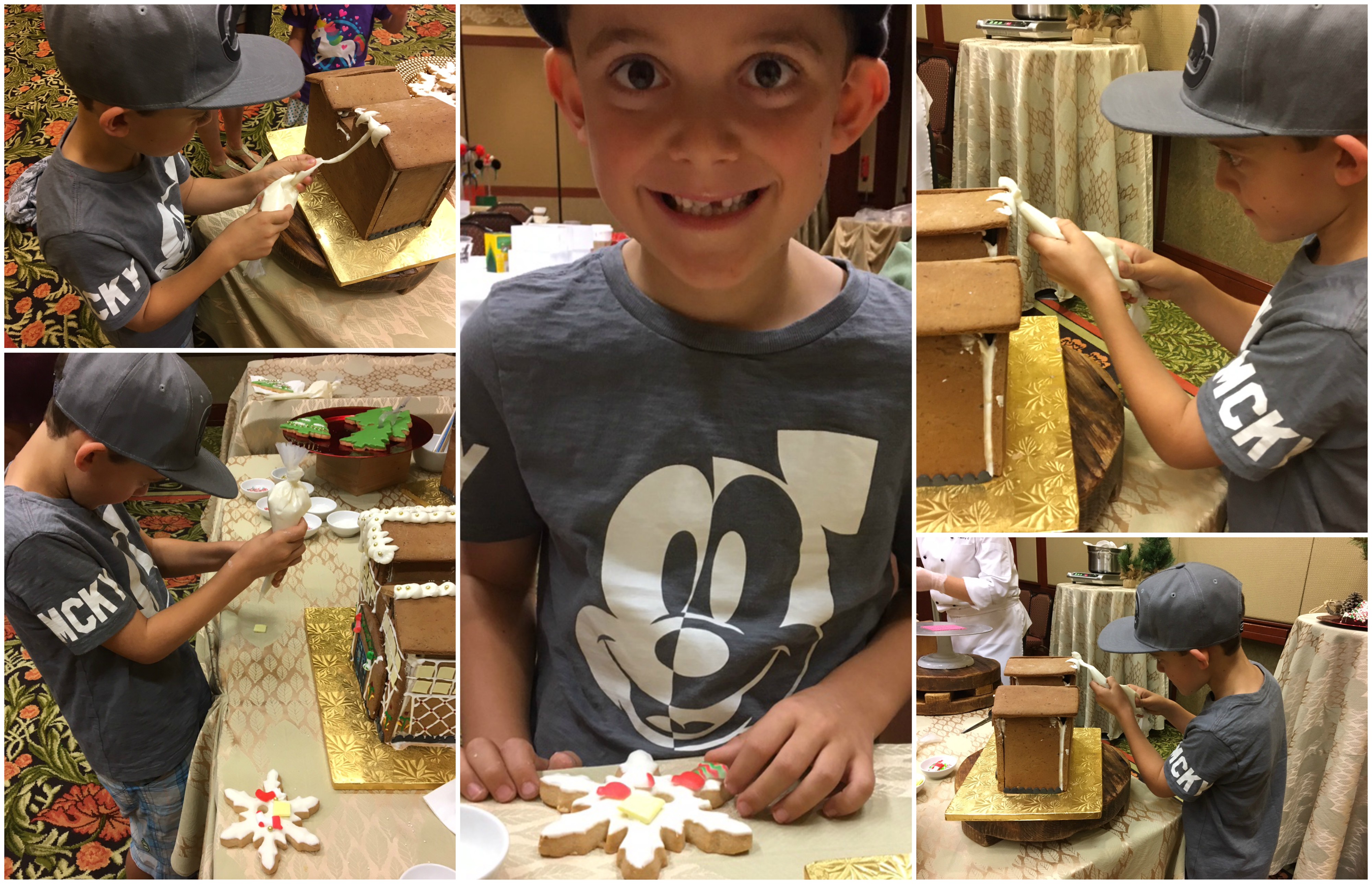 This festive season includes the return of favorite holiday experiences, including Festival of Holidays, “World of Color – Season of Light,” and the “Believe … in Holiday Magic” fireworks spectacular. 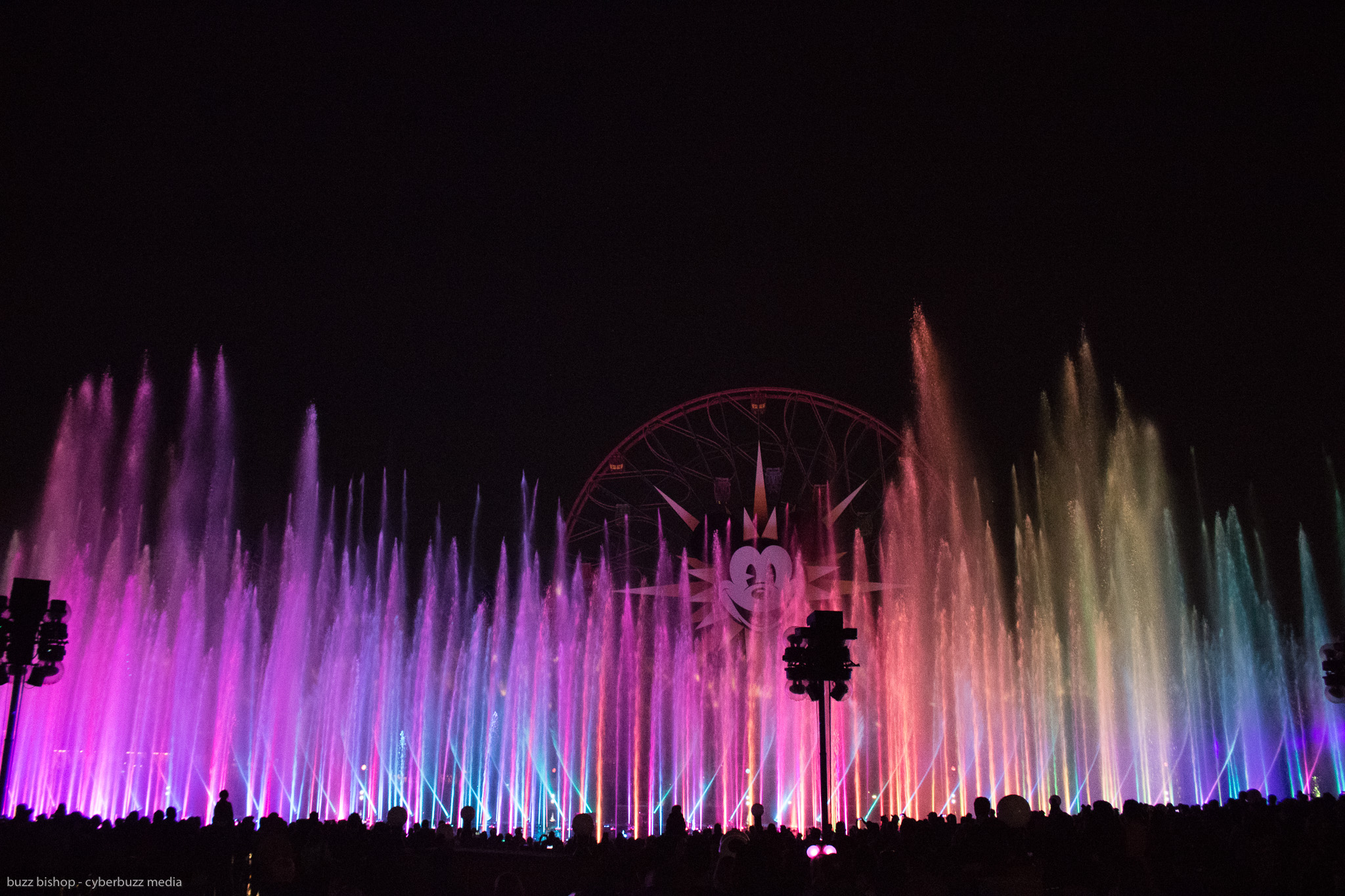 World of Color is a fantastic show over in Disney’s California Adventure. The fountains in Paradise Bay in front of California Screamin‘ put on a fantastic show. Fine mist sprays in the air as the water dances and Disney classics are projected on to the watery “screen” to relive classic holiday songs with memorable moments from treasured Disney animated films. 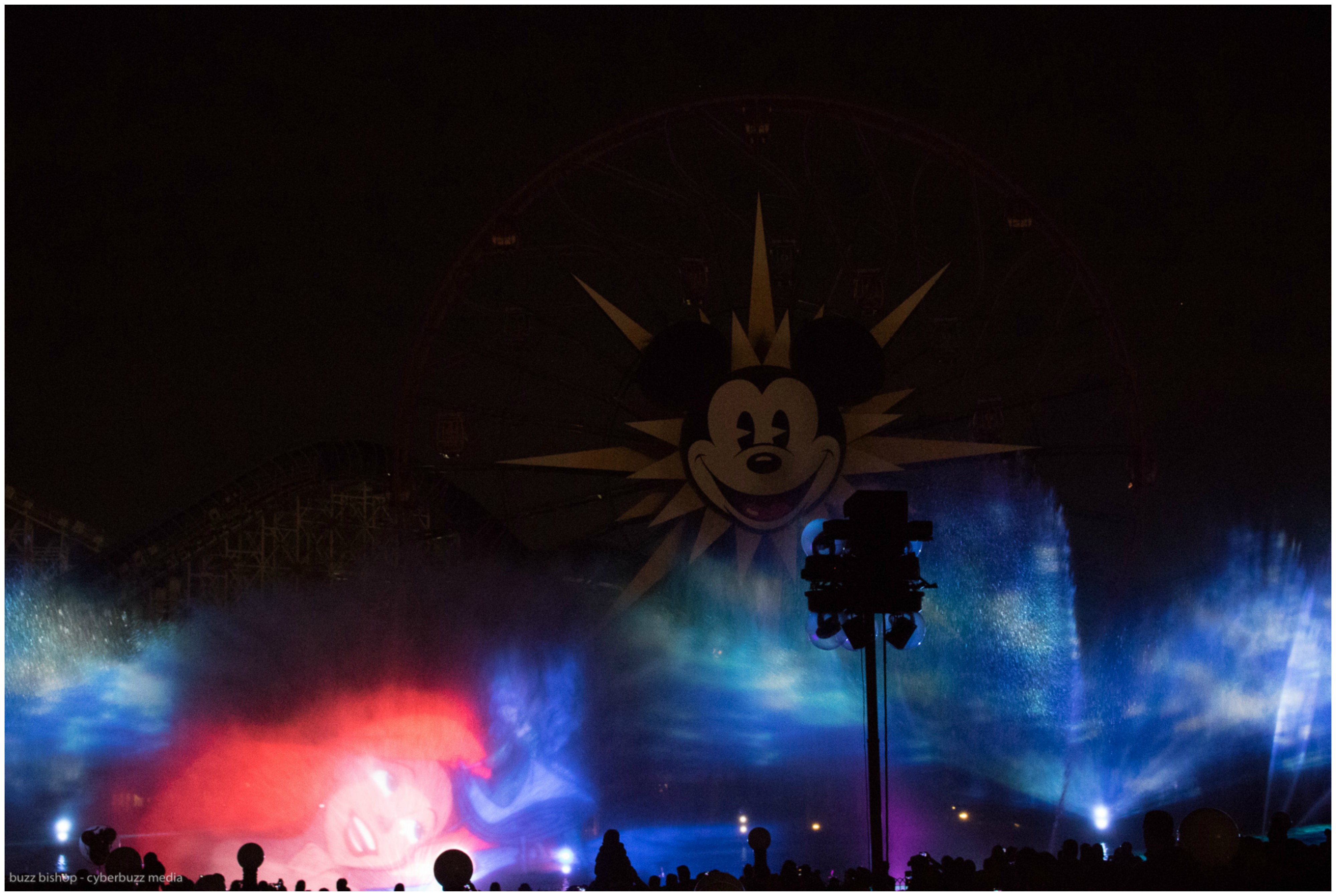 Guests plan their seasonal visits year after year to experience beloved Holiday traditions, from snowfall on Main Street U.S.A., to glistening décor, Disney-themed treats, holiday entertainment and the one-of-a-kind transformations that create “it’s a small world” Holiday (showcasing traditions from around the world) and Haunted Mansion Holiday showing off the same magic that has lasted since Halloween.

The Downtown Disney shopping, dining and entertainment district and the Hotels of the Disneyland Resort join in the holiday festivities with twinkling lights and ornaments, holiday displays, special entertainment and holiday dining with themed menus.

Disclosure: A portion of our travel expenses were furnished by Disney Canada