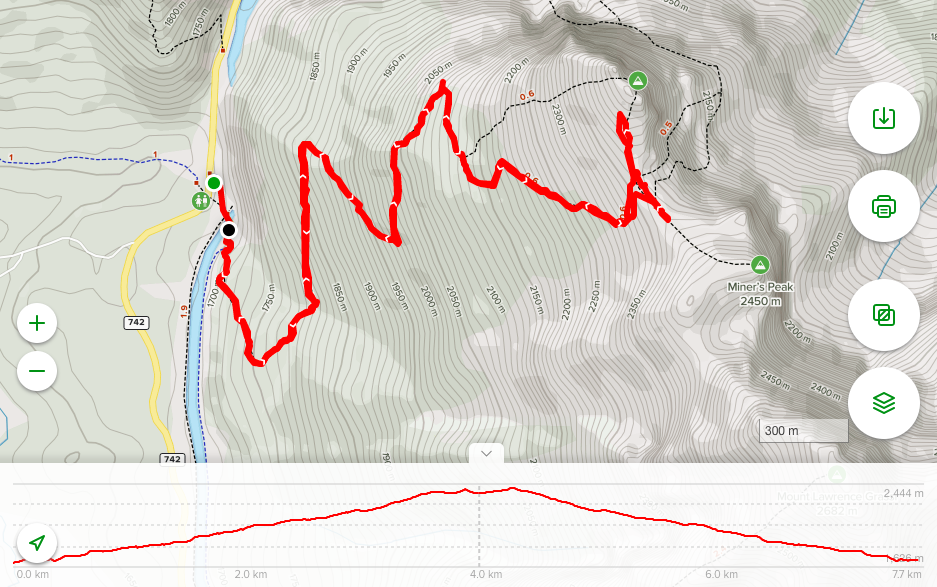 GETTING TO HA LING PEAK:

Getting to Ha Ling Peak is easy, just head west about an hour from Calgary to Canmore and follow the signs to the Canmore Nordic Centre. Once you get through town and start climbing the

ridge, just keep going past the Canmore Nordic Centre and past the Grassi Lakes Trail parking lot and continue along the Spray Lakes Trail.

After about 2km of rutted gravel road, you’ll see the Goat Creek Trail parking lot off to your right-hand side. If you arrive any time after late morning, or on the weekend, you might want to just pull back to one of the parking lots along the Spray Lakes Reservoir. This is a very popular trailhead as Goat Creek, EEOR, Ha Ling, and Miners Peak all launch from the same spot.

You need to know right off the bat that this is a very popular hike easily accessible from Calgary and Canmore. It’s also a hike that has been closed for trail redesign, and through the spring of 2020 was closed due to trail conditions. It’s a popular trail with pent up demand. It’s going to be busy.

Even though it’s busy, it’s a trail that is steep, strenuous, attracts wildlife, and can experience wild swings in the weather. Bring poles, bear spray, extra food, a change of clothes, and a first aid kit. On our Thursday morning climb we saw everything from 70 yr old grandmothers in loafers to packs of young families taking to the trail. A variety of skill levels can do it, just be prepared to take your time. 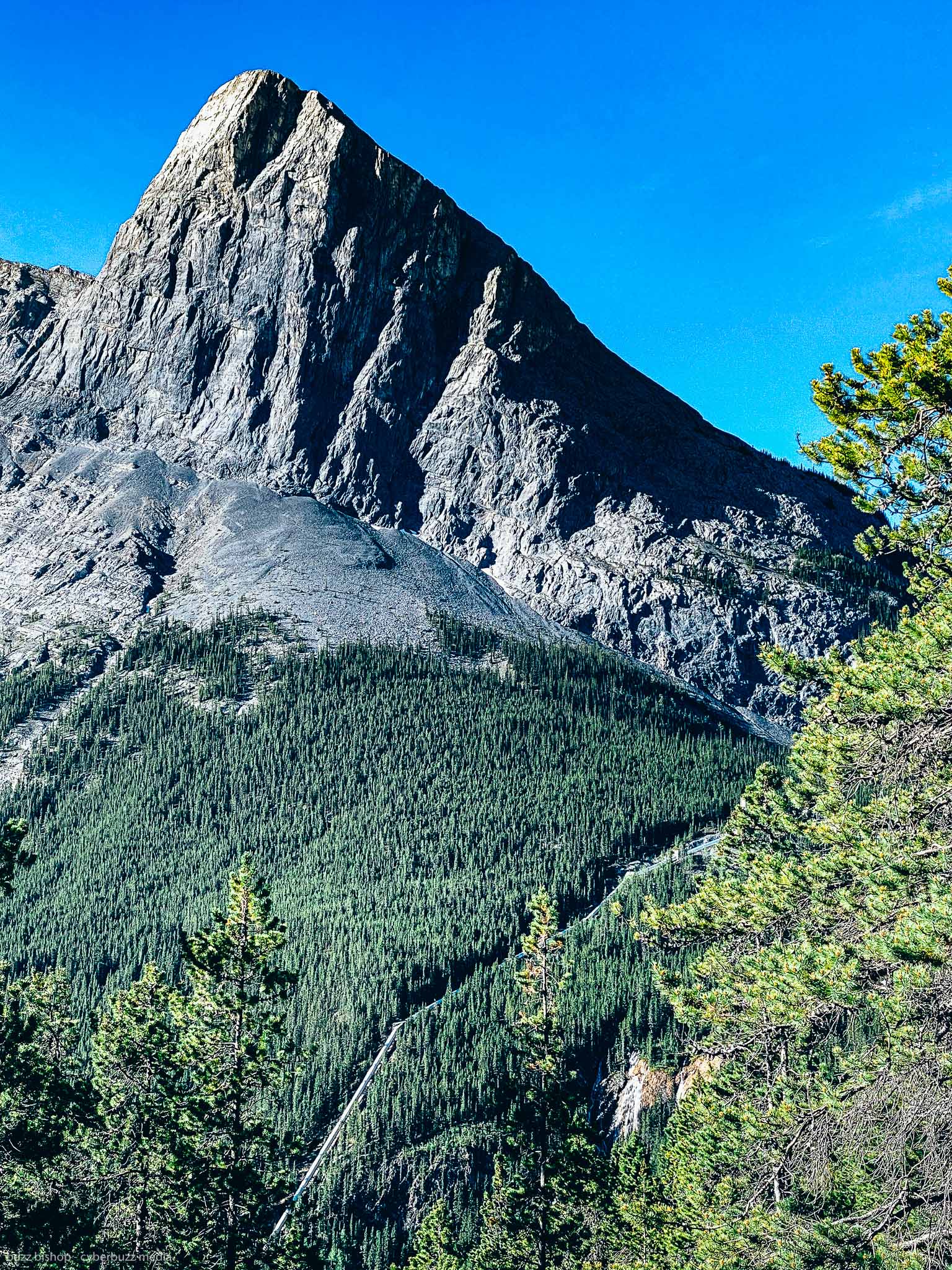 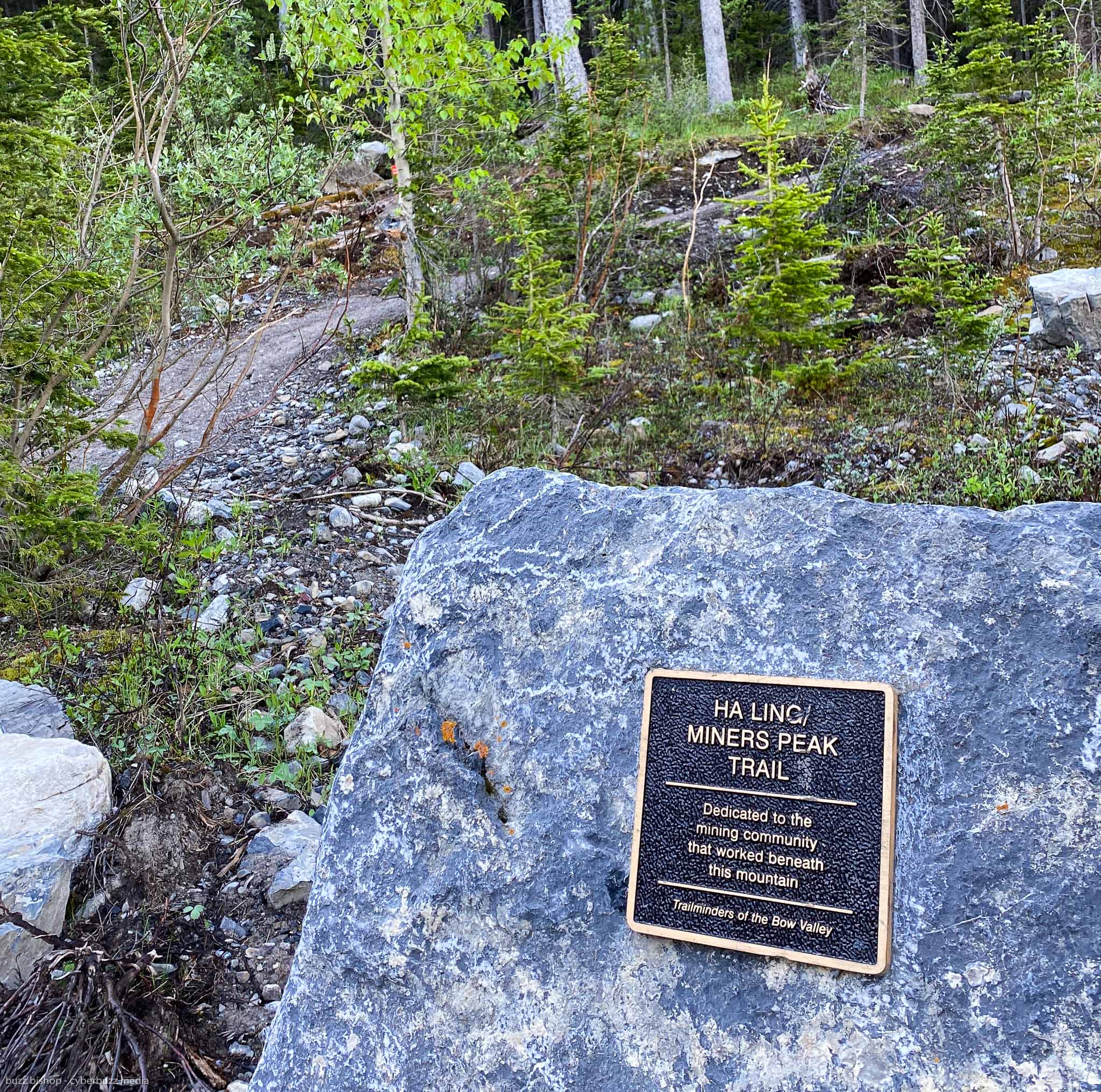 The trail head for Ha Ling Peak and Miners Peak is just across from the Goat Creek Trail parking lot. You climb a little bridge over the Spray Lakes Reservoir and you’ll see the above plaque at the entrance to the trail. Both peaks are reachable from this trail head with a wide saddle in between both of the peaks.

The Ha Ling Peak trail was reconstructed through 2018 and 2019 and the new trail offers longer switchbacks across the mountain to try and take out some of the steep sections and offer more slope stability. It’s still a steep trek, you climb nearly 800m in just over 3.5 kilometres of trail, so be prepared for some huffing and puffing.

The first two thirds of the trail are below the tree line and are on a smooth, cool path covered in towering pines. It’s not a wide path, with everyone going up and down the same trail. In this COVID-19 era it can be congested when trying to pass other hikers. 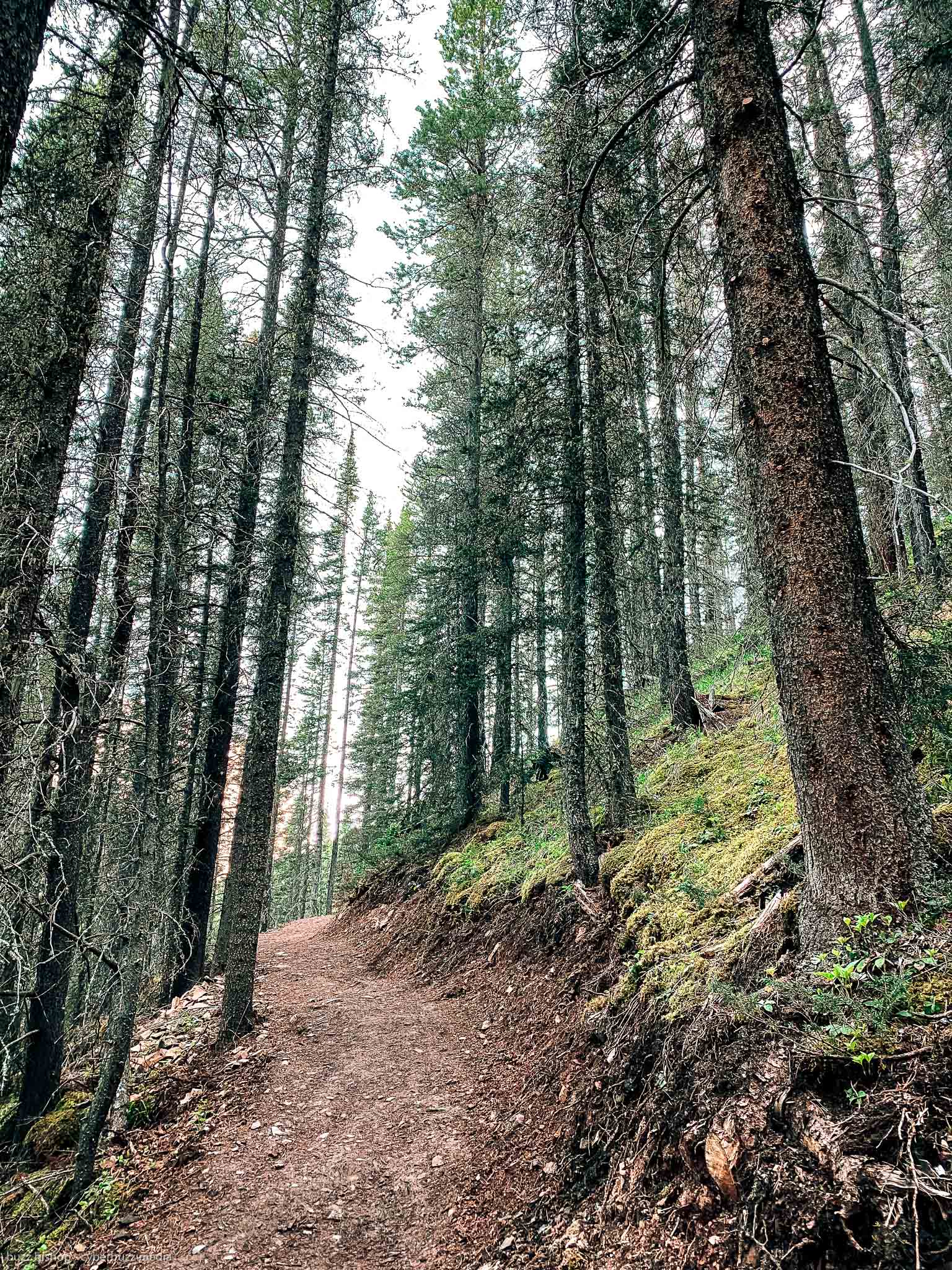 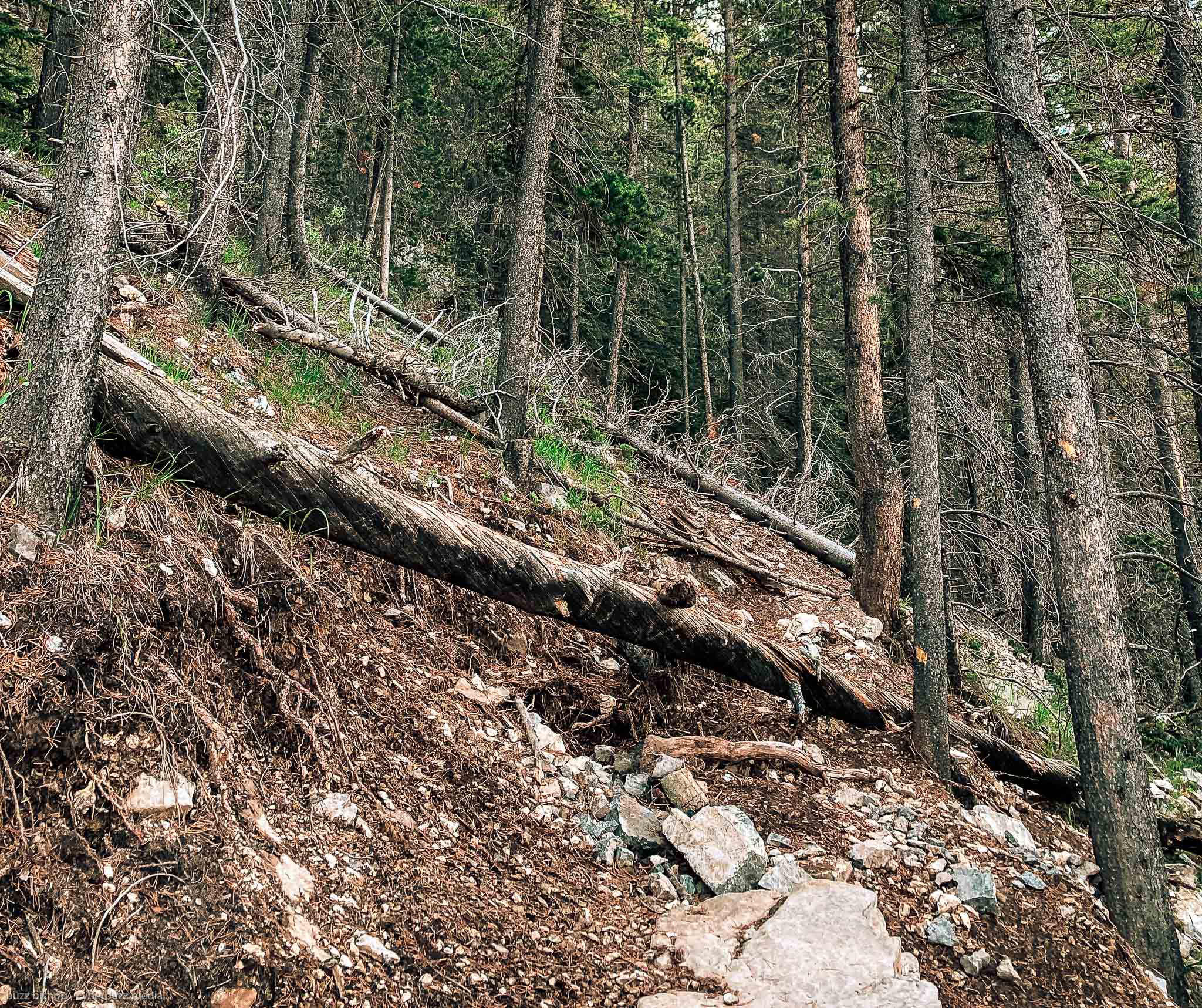 As the reconstruction created a mostly new path, you can still see where some of the old trail was and has been blocked for reclamation. Trees and rock that were removed or blasted for the new trail have been strewn across the old trails. There really isn’t a chance of wavering off the new path onto the old one, it’s barely recognizable. 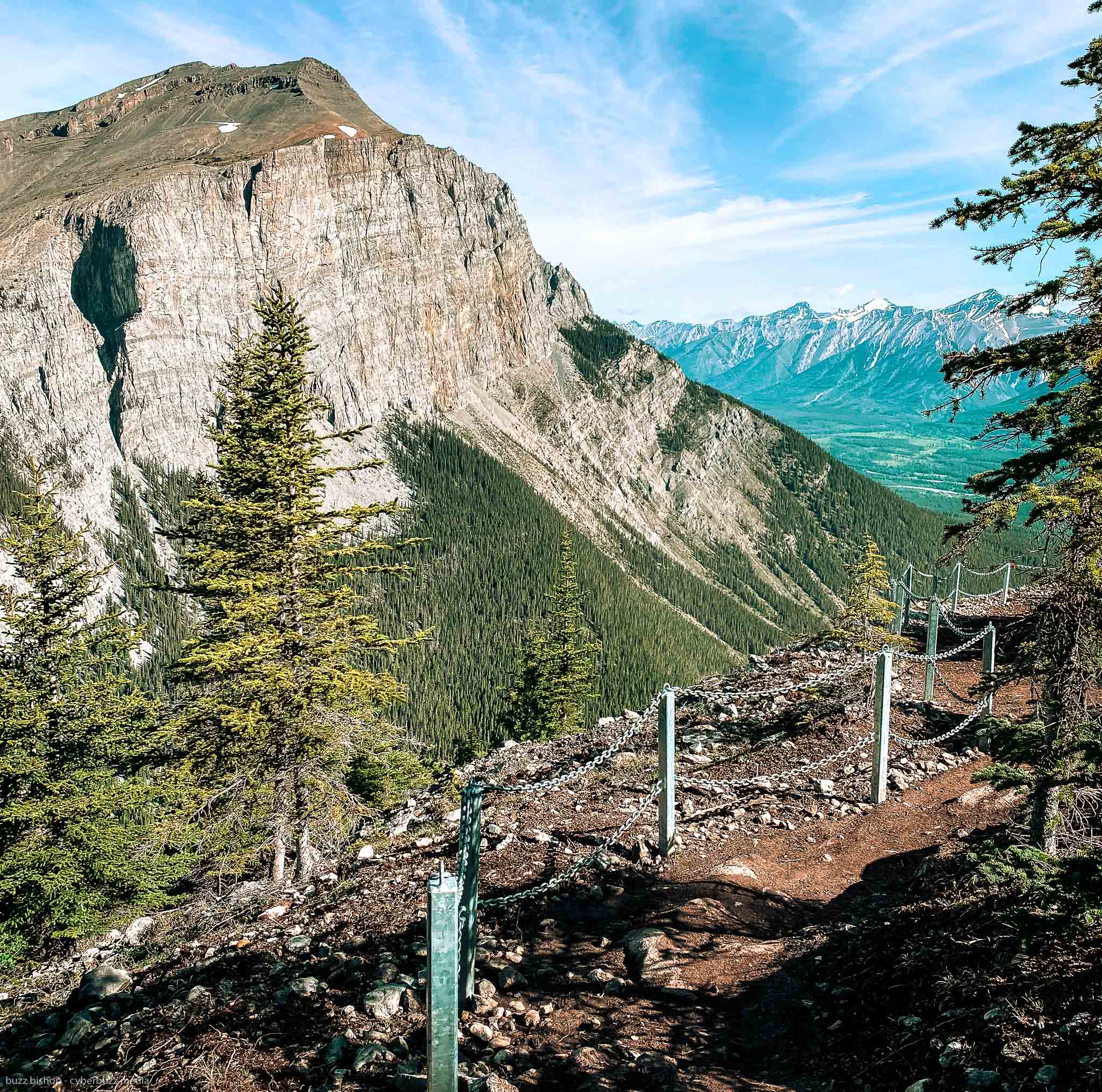 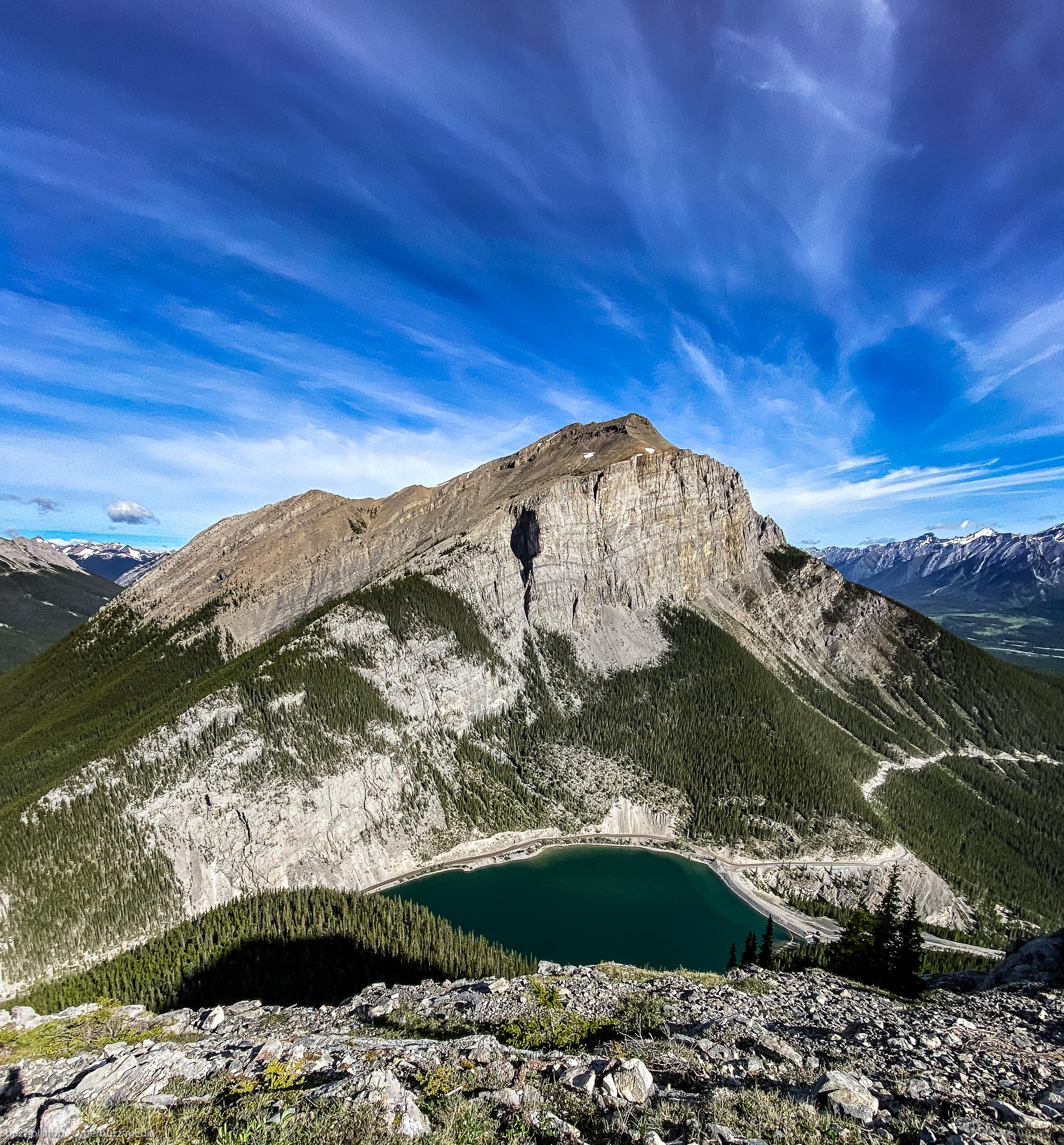 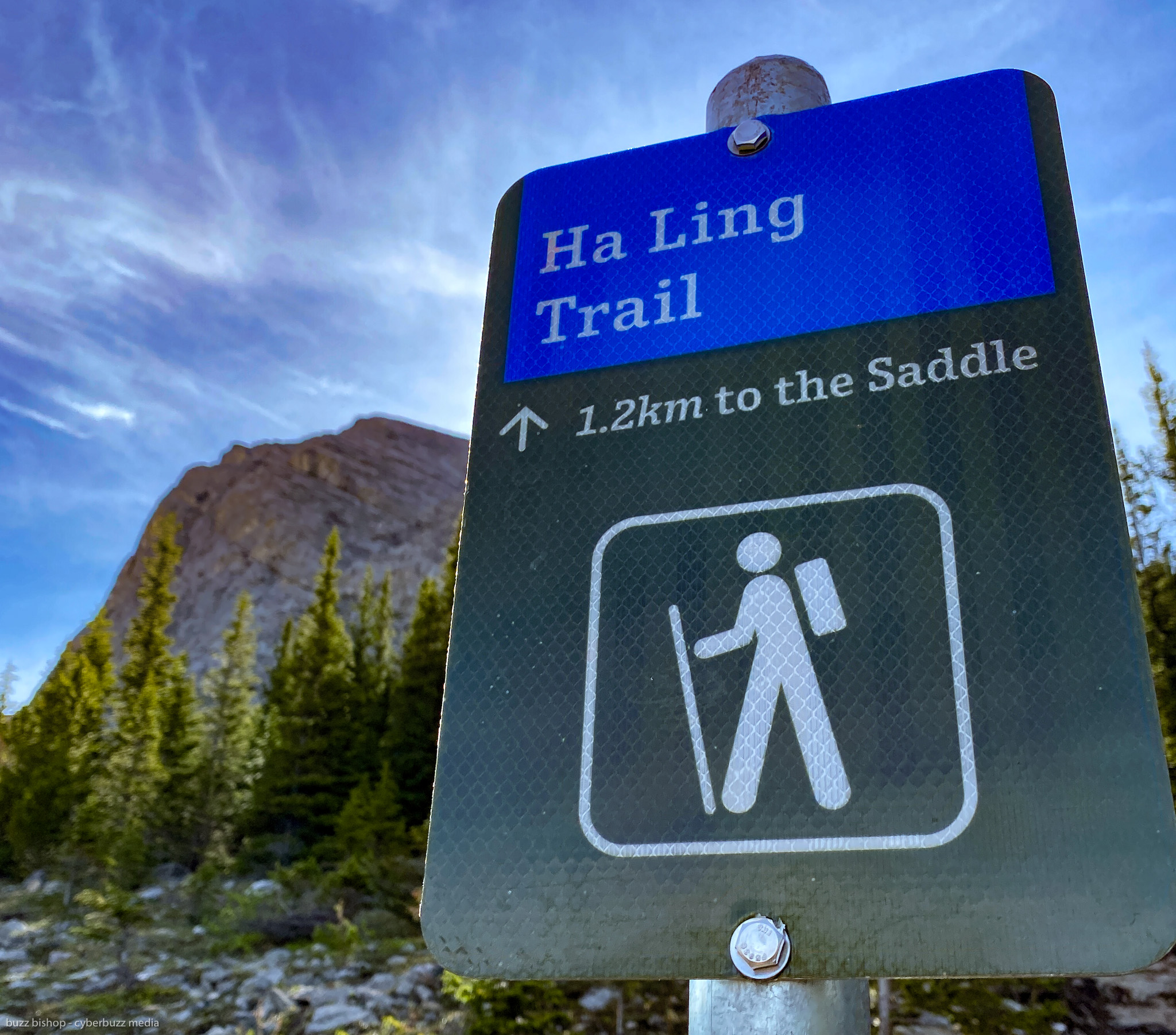 Just past the viewpoint you’ll see one of the biggest changes with the Ha Ling Peak Trail realignment. Before, when you came out of the trees, it was a web of trails climbing the scree to the peak. None were particularly better than the other, it was a tangled choose-your-own adventure straight up through slippery stones.

Now, stairs have been built to help you get out of the trees and onto the scree. Again, they’re very narrow and there’s no room for passing if people are coming down and going up on a busy weekend. 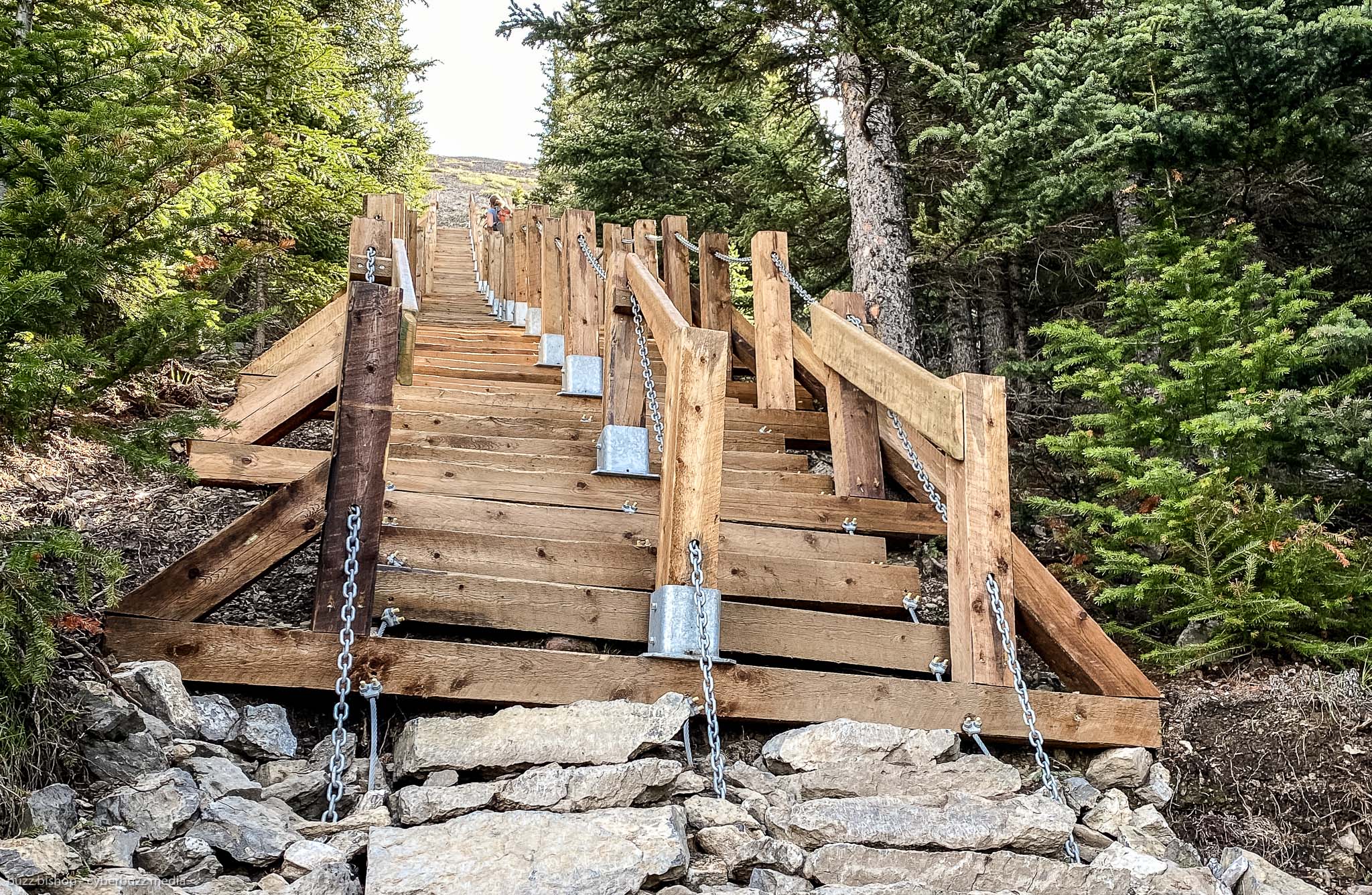 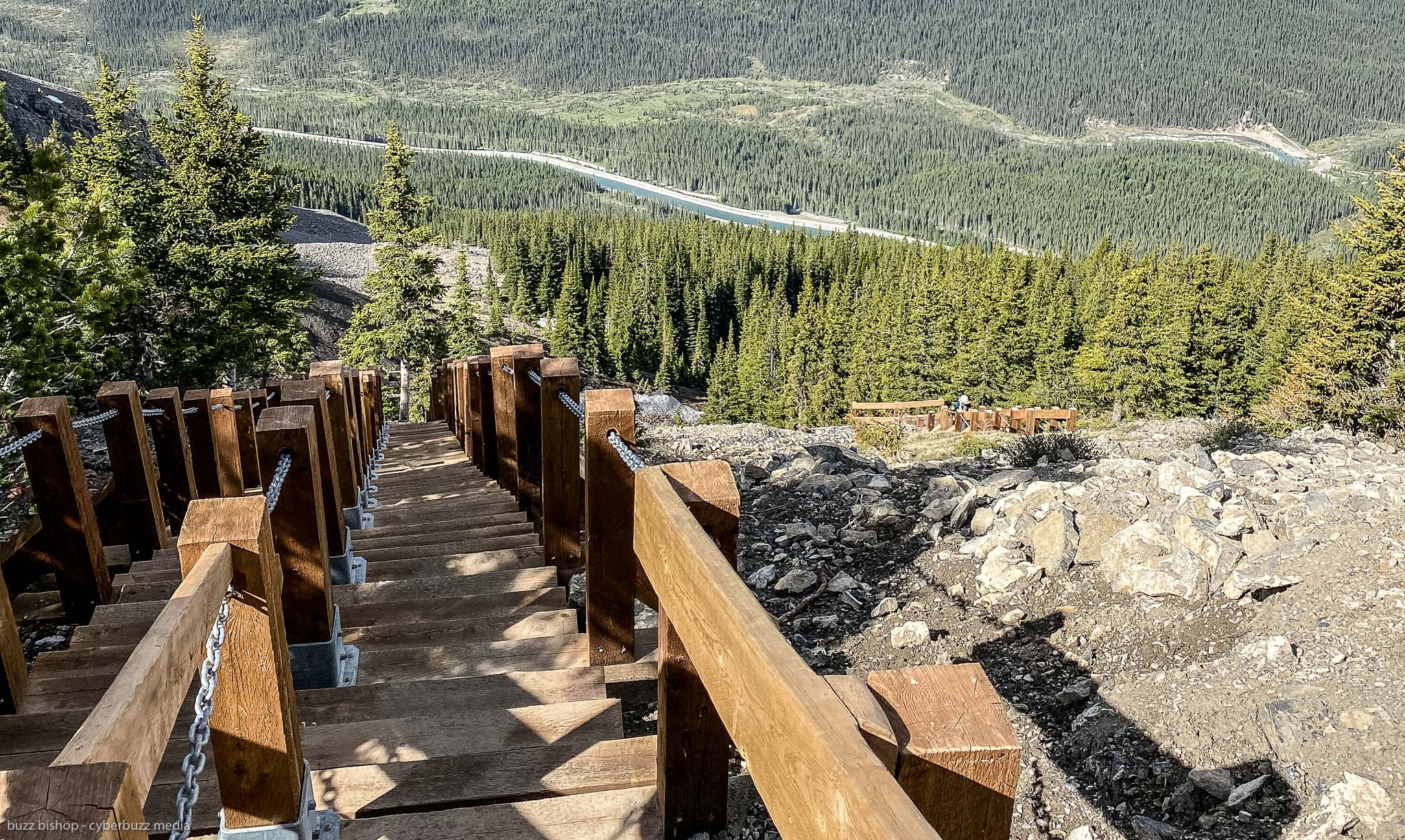 After the sets of stairs, a well defined path has been built to help you climb the scree to the saddle. This, effectively, removes all the scrambling from the official part of the trail and makes it much easier to climb. 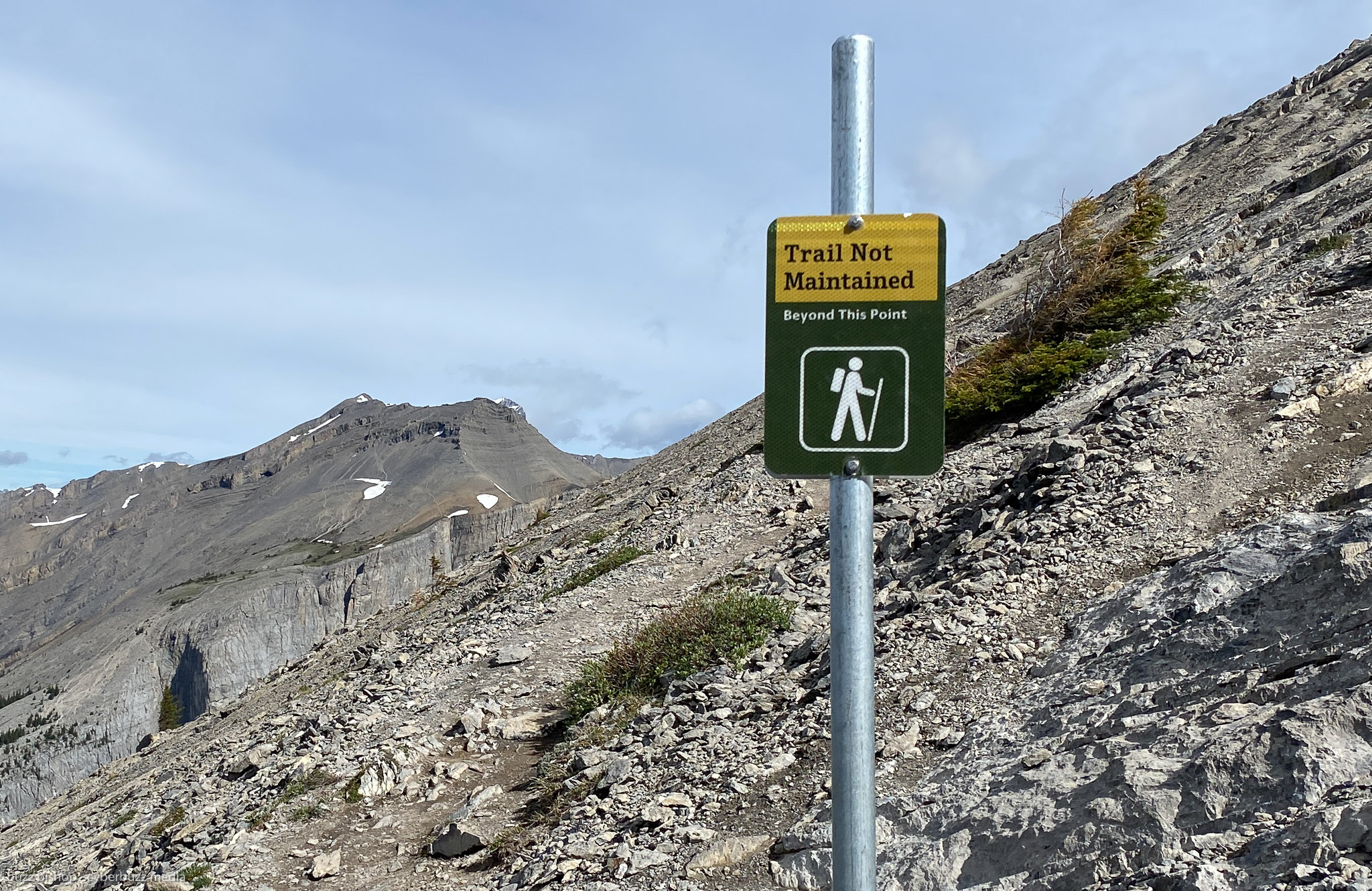 BUT they only maintained and built the trail to the saddle between Ha Ling Peak and Miners’ Peak. If you want to go all the way to the summit of Ha Ling, you’ll need to do some scrambling. The slope gets very steep and technical, and while we saw many people bounding up to go right to the top, we decided against it.

Going up on a technical scramble is one thing, coming down is entirely different. We played it safe and chilled out on the rocks and enjoyed the view of Ha Ling rising above Canmore below and still a few skiffs of snow even into late June. 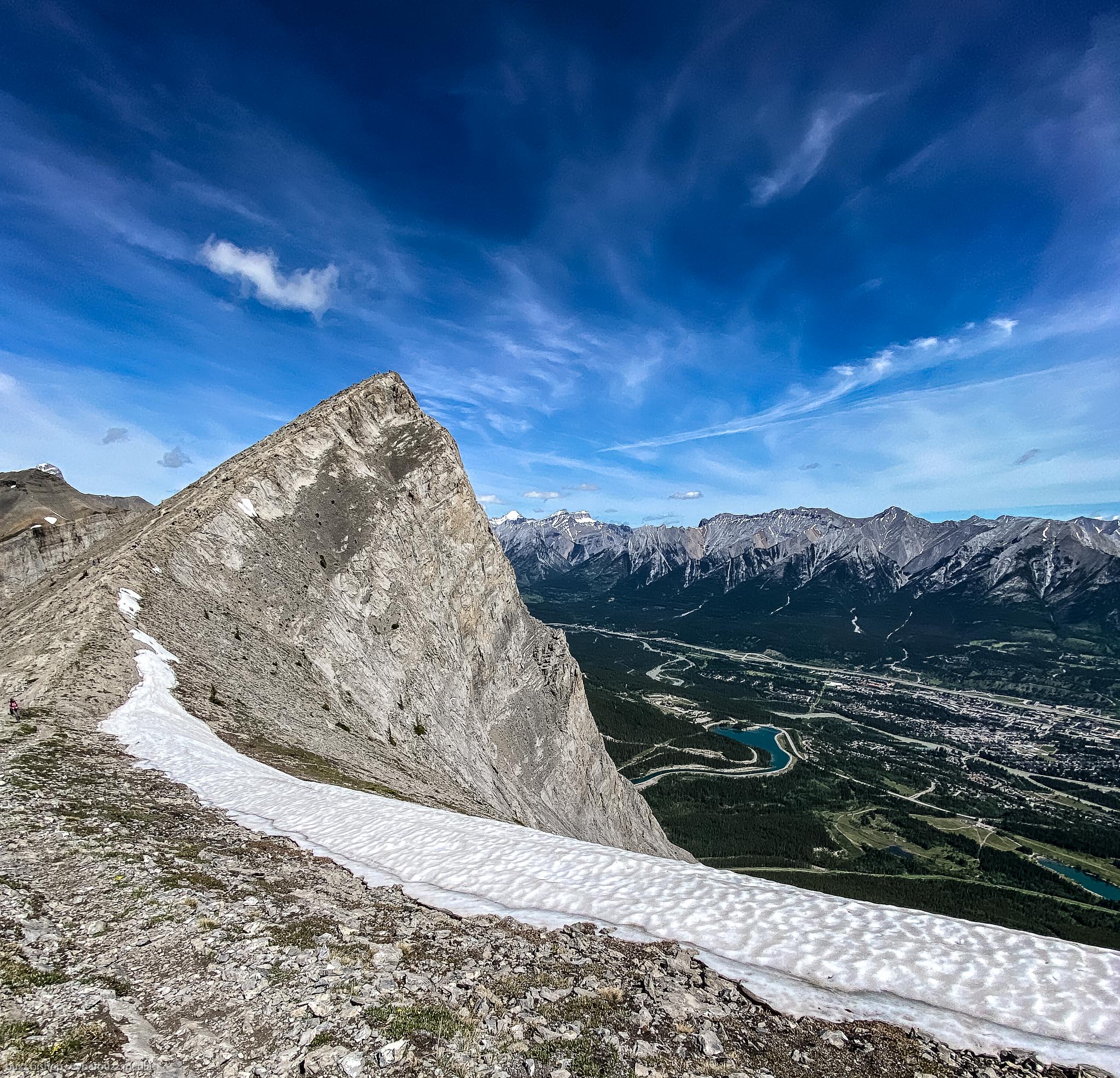 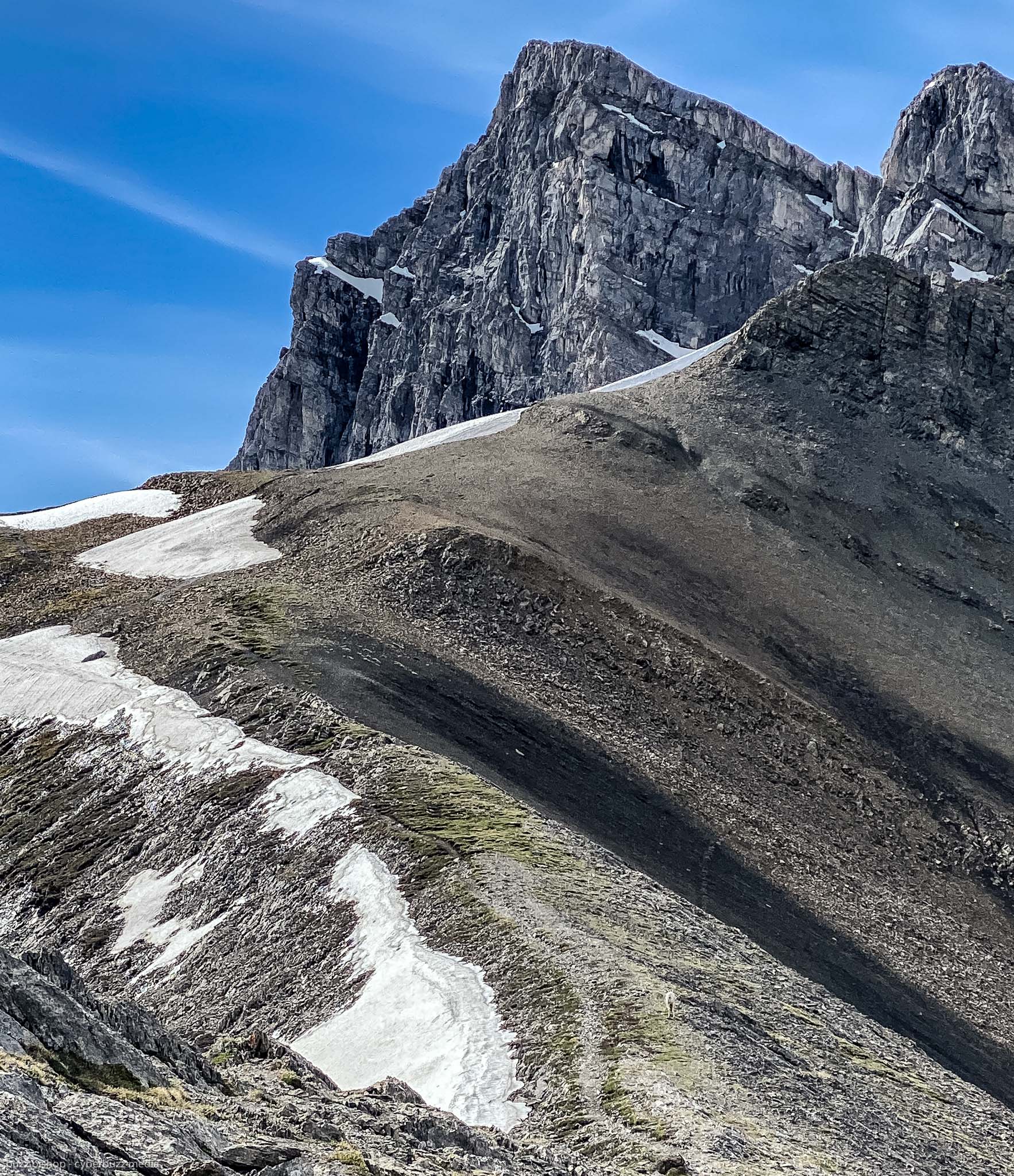 Can you find the mountain goat in the photo above?

If you really need to bag a summit on the hike, and are impressed with the climb to Ha Ling, wander over to Miners’ Peak. It’s just a gentle path through the rocks to climb over to the eastern end of the saddle and claim your title. 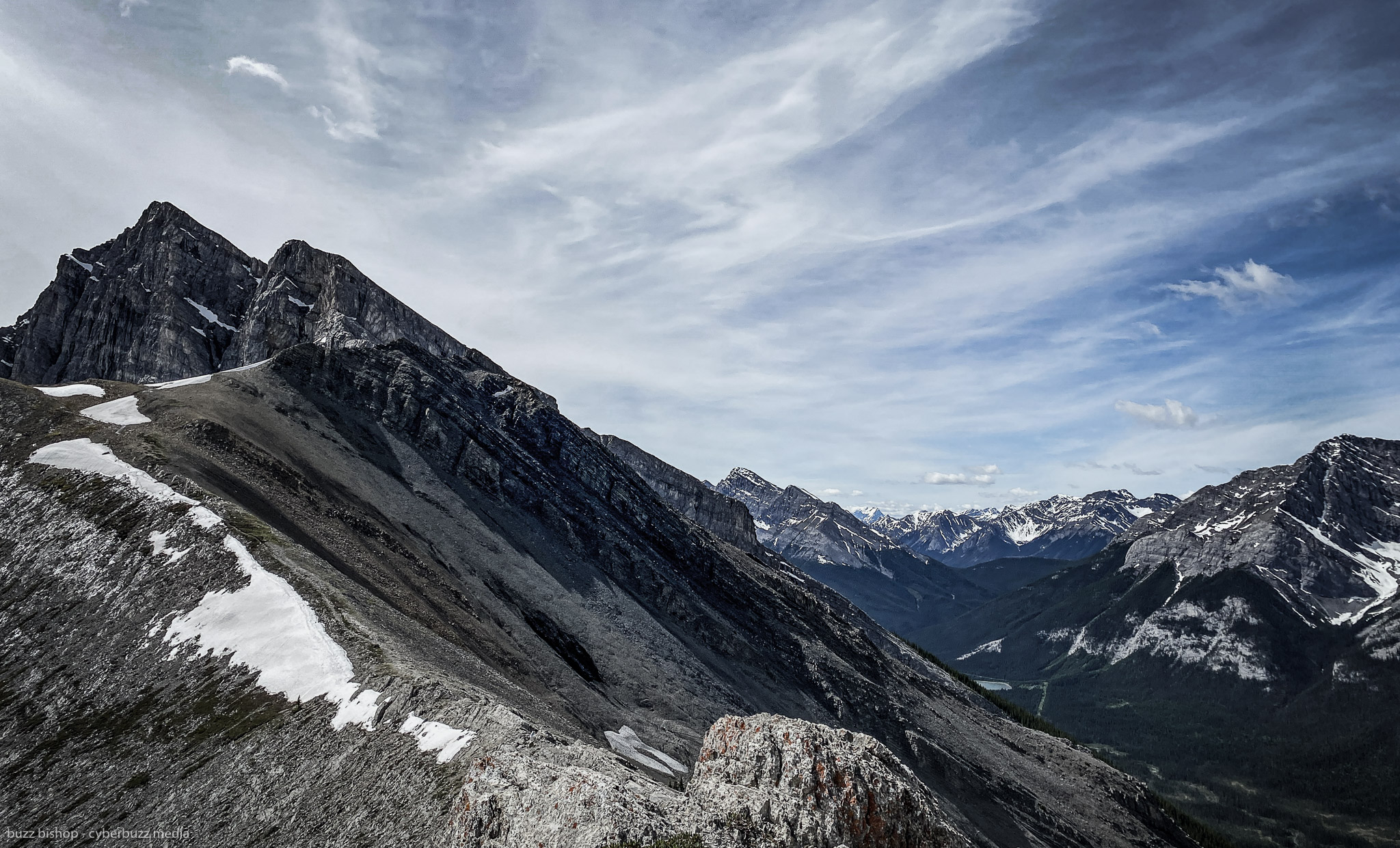 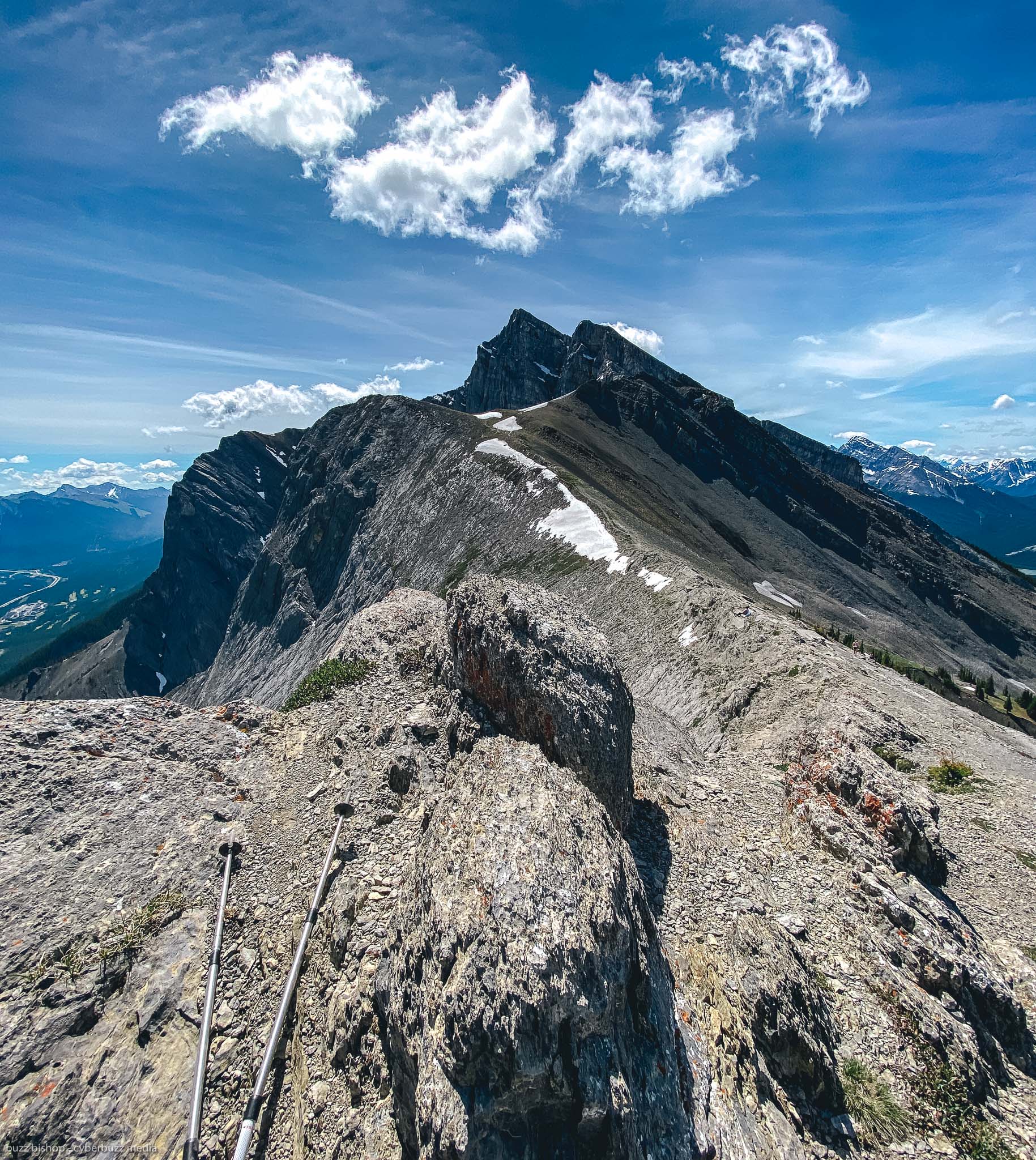 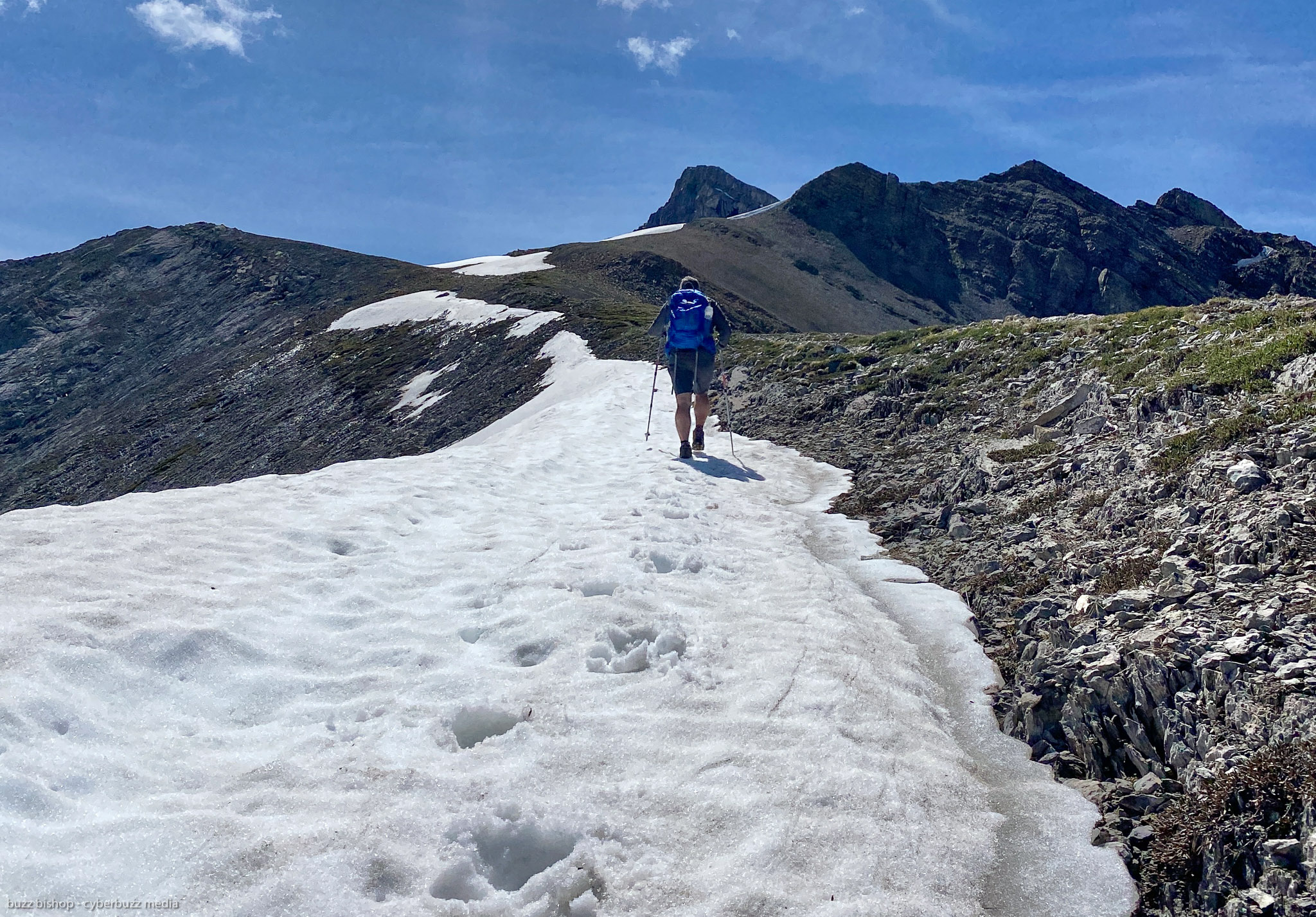 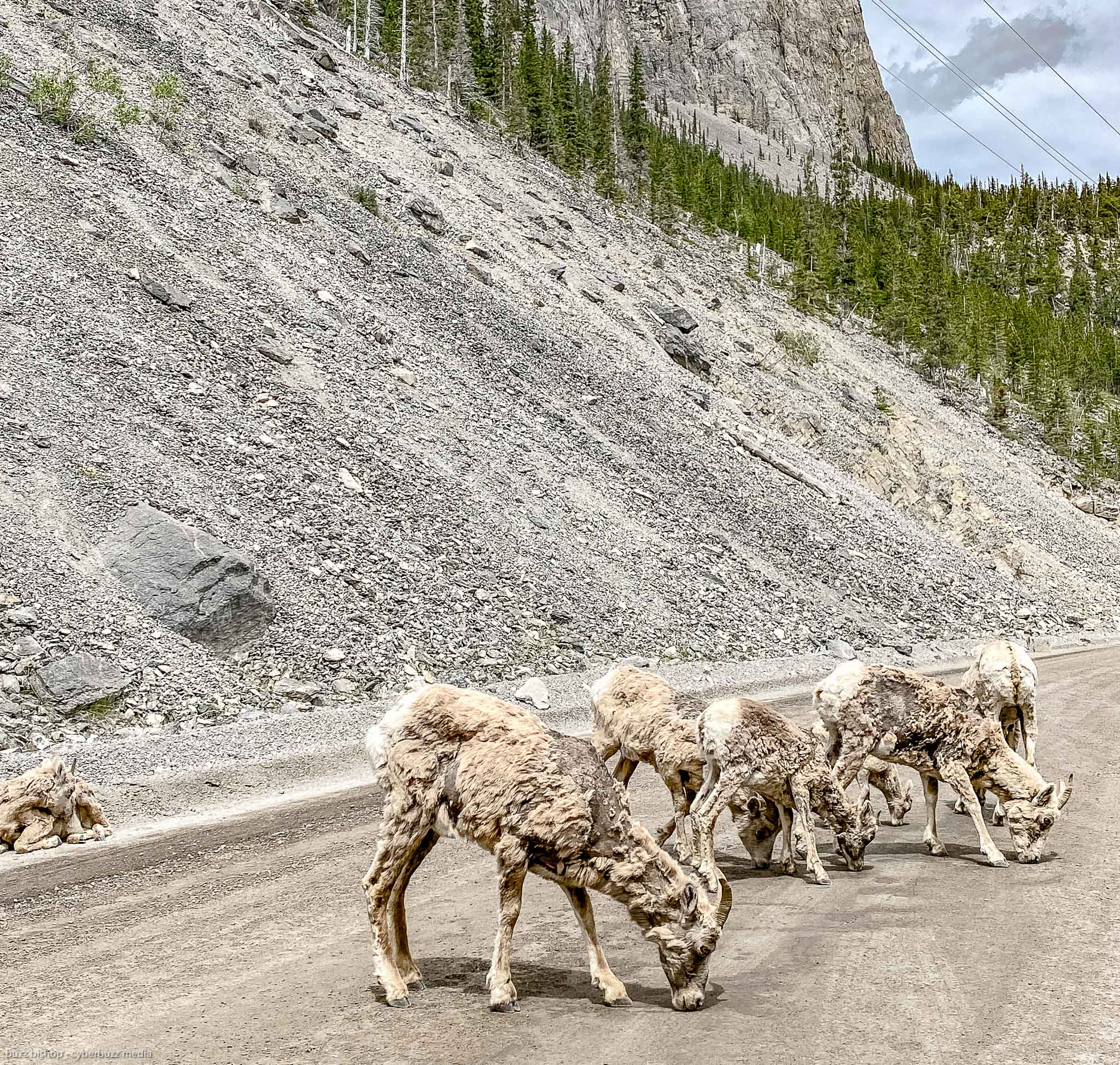 1. Go mid-week and go early because this is a VERY popular hike. We climbed on a Thursday, leaving Calgary just after 7am. We had no problem finding a spot in the Goat Creek lot. When we descended, just before 1, the lot was full, cars were on the road and into the overflow lot along the reservoir. I can’t imagine what it would be like on a midday weekend.

2. Ha Ling is a very exposed peak so check the weather before you go and be prepared for wind, rain, or snow.

3. Bring poles! If it’s a steep climb, that means it’s a steep descent. While you don’t have to scramble through the scree to get down as you did before the redesign, it’s still a steep slope and the poles did us well to get off the summit.

CHECK OUT MORE OF MY
ROCKY MOUNTAIN HIKING REVIEWS HERE 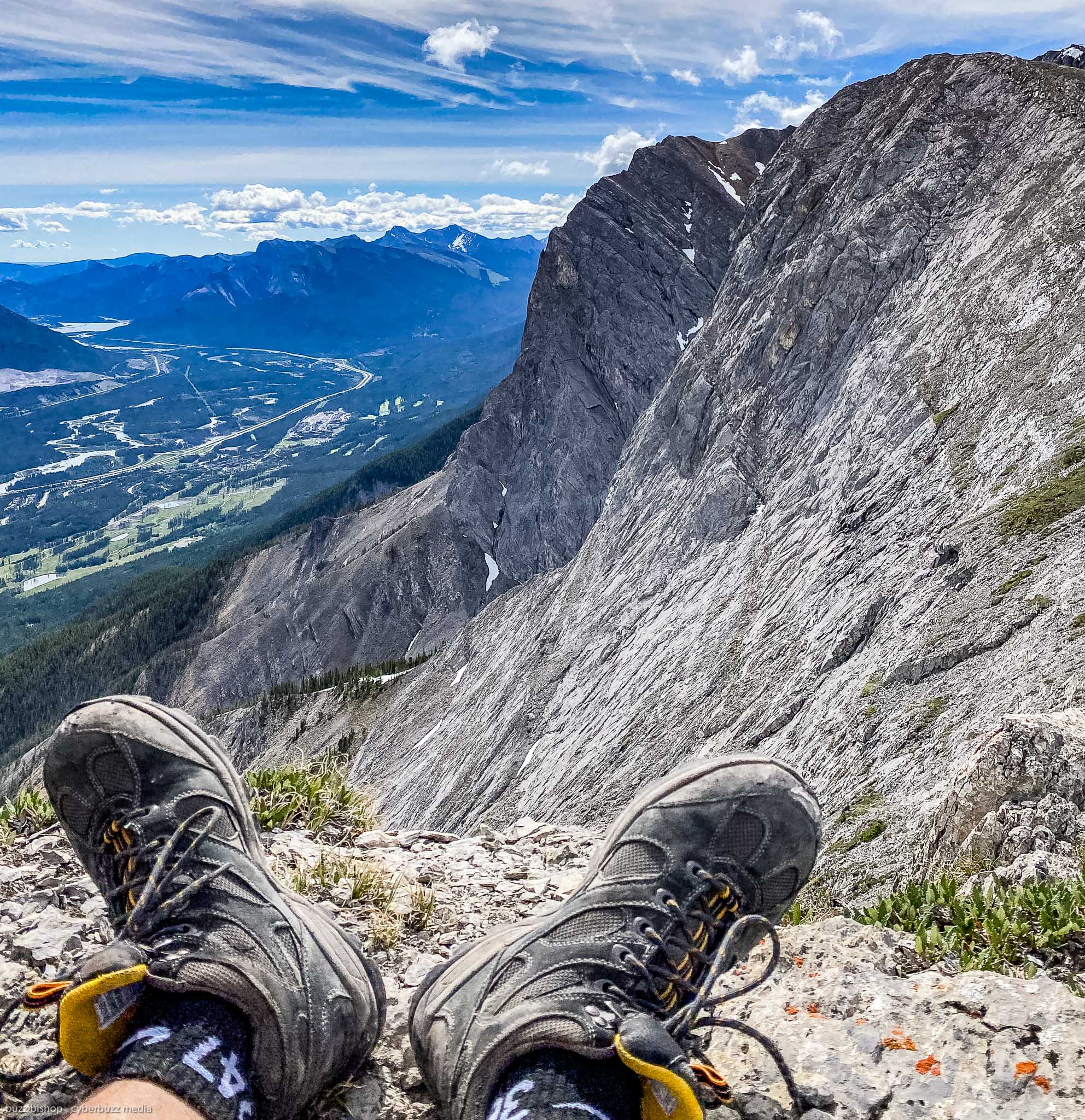