The drive between Calgary and Edmonton should take less than 3 hrs. It always takes me closer to 5 because I can’t not stop at least twice along the way. Sometimes I’ll have dinner in Red Deer, or I’ll fill up my growlers with craft beer in Ponoka.

Sometimes it’s a sweet treat in Lacombe, or a visit to some animals in Innisfail and then a break at a beach. There’s so much to do that I still haven’t played that golf course by the highway, taken the Scandinavian trail, or hit that bakery in Beaumont that I keep hearing about.

The drive from Calgary to Edmonton is pretty much dead straight. There are a few bumps in the road as the highway descends into valleys formed creeks and coulees, but apart from that big sweeping curve near Red Deer, it’s pretty much straight. The drive is in the midst of horizon stretching prairie, you feel like you can see Winnipeg to the east, and to the west, well those mountains look miniature and out of reach. It’s a pretty boring drive, frankly.

So there are only two ways to make it more bearable: drive a fun car, and take some stops to end the eternity of staring at the bumper in front of you. Here are some places I love to hit when I head up north. Yes, most of them involve food.

The plan when I drive to Edmonton is to pick a place to have lunch or dinner along the way to break up the drive. Then I pick a place to pick up some snacks, suds, or sweet surprises for my family when I arrive home, or for my clients on the other end.

Just off the highway in Innisfail is Discovery Wildlife Park, a place with lions, tigers, and bears (oh my!). Seriously, this facility provides permanent homes for unfortunate wildlife – orphans that cannot be released back into the wild, exotic pets that have been kept illegally as well as unwanted pets. Some of the animals receiving training to be used in films like Anchorman and Brokeback Mountain. 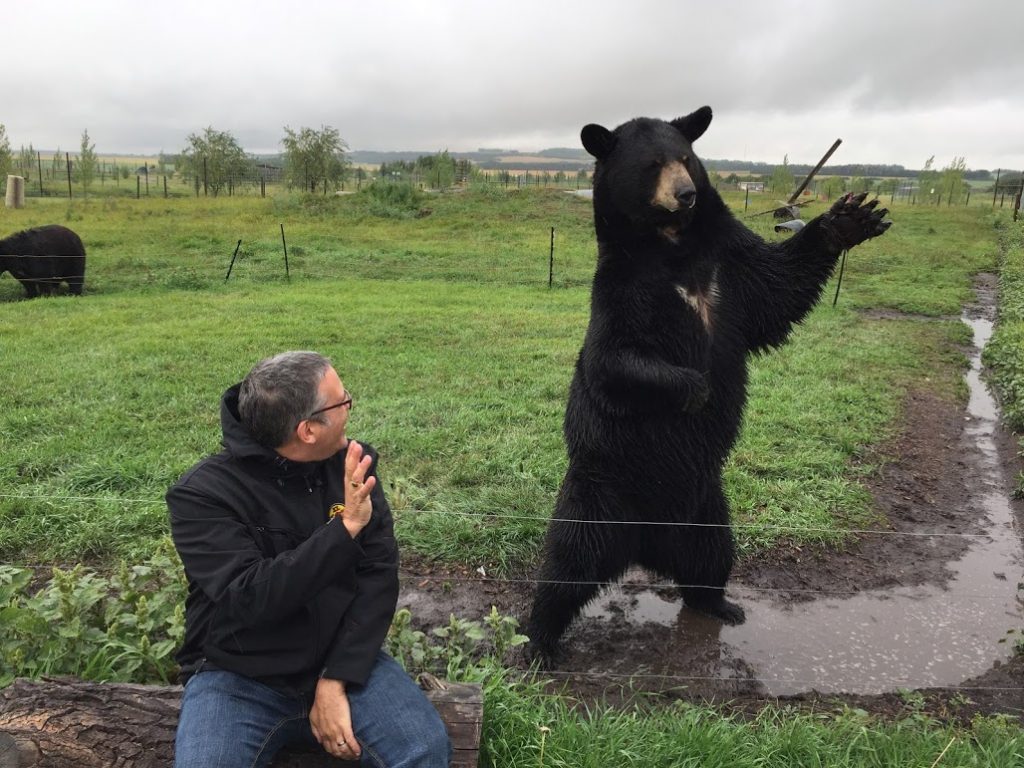 If you’re really taking your time on a trip to Edmonton, you need to take the back roads. Just get off the highway and take the roads that parallel the QE-2. It’s a slower pace, but you’ll stumble into more small towns and random things like heading west from Innisfail and falling upon the Scandinavian Trail Dickson is the oldest Danish settlement in Western Canada and the area around it features historic creameries, viking ships, a vintage general store, museums, and more.

I finally pulled into Sylvan Lake this summer for lunch on one of our Calgary-Edmonton trips and fell in love with the old school quirkiness of what a summer lake town can be. The central area of Sylvan is just a few blocks long, the Big Moo Ice Cream Parlour was lined up out the door, while every patio was packed with people soaking up summer.

Lunch mixed in with a little siesta on the shore while the kids splash in the lake? Perfect. If Sylvan is a little hectic for your summer liking, head further north on the back roads to Aspen Beach Provincial Park on Gull Lake with an equally wonderful beach and a very shallow play area that stretches forever.

Classics are classics for a reason. The Red Deer location of Peters’ Drive-In doesn’t have the same nostalgia as the original in Calgary, but it’s still a good, sloppy burger to have alongside way too many fries and a rich, thick, custom-designed milkshake. If all you know of Red Deer is the strip of gas stations and drive thrus along Gasoline Alley, take a few minutes and get yourself into town.

The downtown blocks of Red Deer have big patios into the street, interesting murals and art, and some smokin’ barbecue. Red Boar and Smokery is worth a pit stop for some pulled pork, beans, and coleslaw. 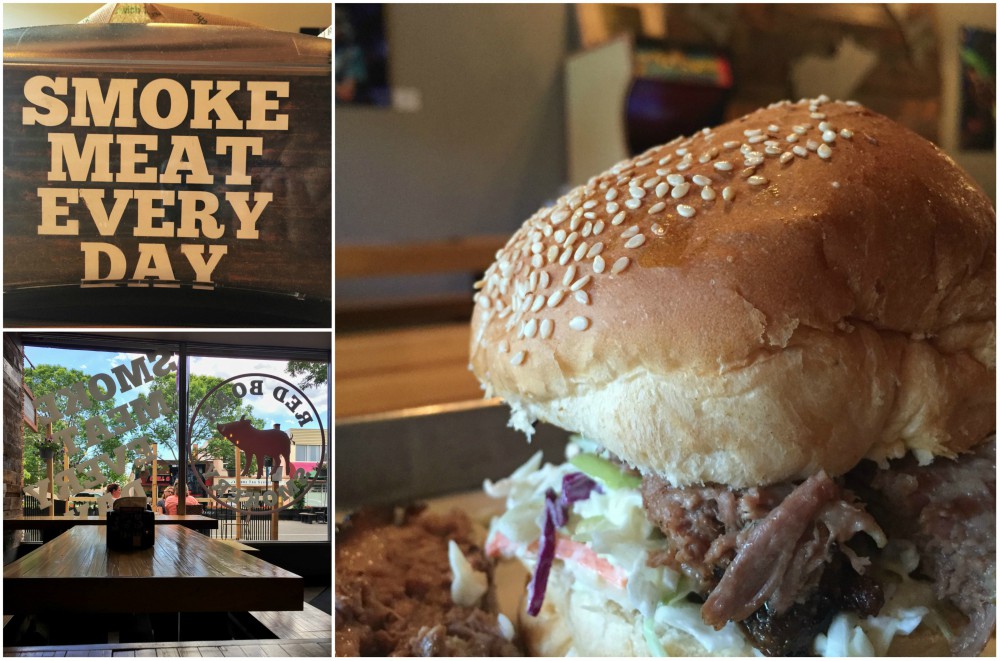 The Donut Mill today is what Tim Horton’s used to be when I grew up. It’s a classic donut shop frozen in time. There is a HUGE case of freshly made donuts right when you walk in, all the old-school flavours are there. You can have a soup and sandwich while you take a break, or just pop in and grab a dozen to snack on the road or to bring for a friend at the end of your trip.

Once you have all the snacks, visit some of the local craft brewers. The loosening of regulations in the craft brewing industry has caused a boom in Alberta, and many of the new shops are just a stone’s throw from the QE-2. Troubled Monk is an industrial park on the east side of Red Deer and worth a visit to top up a growler or pick up a six-pack. 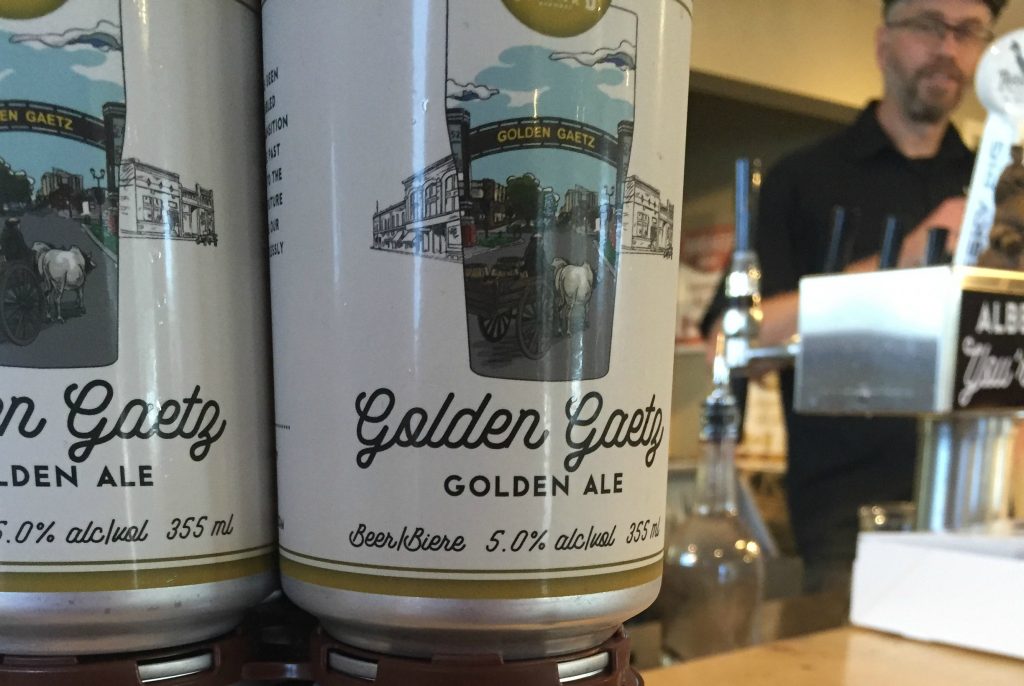 I haven’t paid a visit to the team at Drummond Brewing yet, the team behind the very creative Something Brewing craft label, but I love their stuff. The Dark Side Schwarzbier is perfect during Star Wars season, and I’m also a fan of The White Wit with a splash of summer citrus.

I love Lacombe.  It is a tiny town of less than 15,000 people but it is so cute and has some damn fine places to visit. Just off the elegant red brick buildings of the main street is Cilantro and Chive.

I sat at the bar and stared at a beer fridge filled with nothing but craft brews, discovering a few new shops I hadn’t yet heard of. As I waited for my chicken clubhouse, I overheard the owner / manager / chef bubbly chatting with his staff about the plans for that night’s service. It was a team-friendly atmosphere where everyone was genuinely happy to be there.  An older couple had a date night in a side booth while a young family had a toddler splashing away in a high chair. It was like being at a friend’s house.

Just around the corner is Sweet Capone’s. Again, for such a small town it was a lively place on the afternoon I visited. The line was out the door as everyone waited for a slice of Nona’s lasagna, a cappuccino, or a box filled with a variety of cannoli. Seriously, you’ll want one of each. 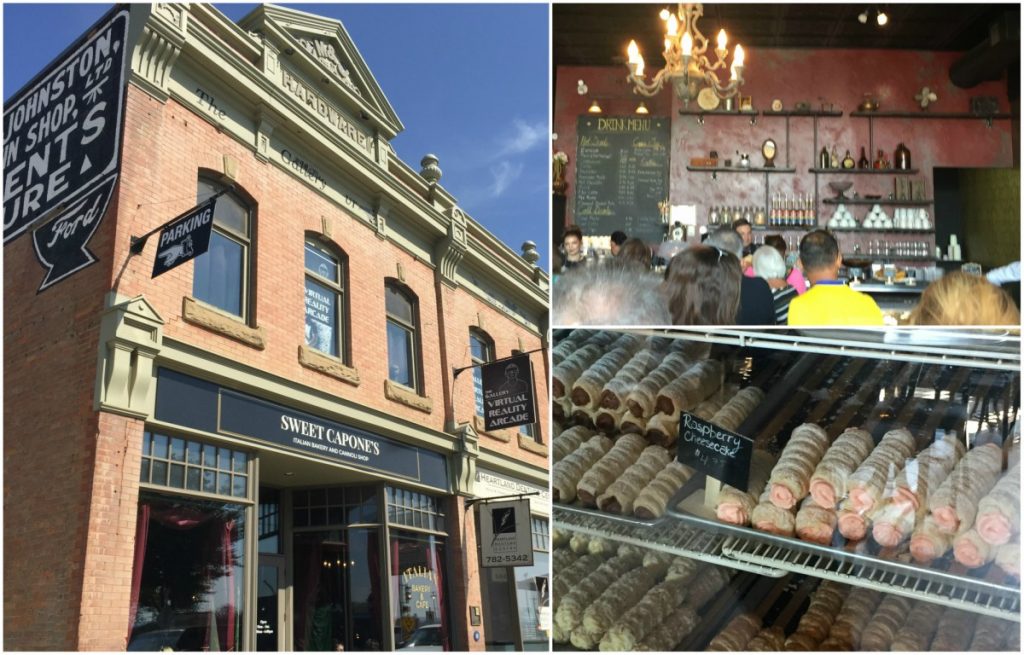 Both Cilantro and Chive and Sweet Capone’s are the kind of place you’d expect to find in a small, hip, neighborhood of a big city. They alone are worth the quick trip off the highway for a break. But I think you might also be tempted to explore the legendary Len Thompson fishing- lure factory or pick up some craft brews at Blindman Brewing before you skip town.

That “golf course by the highway” I mentioned earlier, is the one in Ponoka. Wolf Creek Golf Course features a couple of 18 hole courses, one of them a wild links style that has a couple of holes along the Q-E 2. I look longingly at it each time I pass, but have yet to find the 4 and a half hours in my north-south commute to make a pit stop, but one day.

My last visit to Ponoka was for beer and road snacks. The new brewery I discovered noshing at Cilantro and Chive is Siding 14. It just opened in the summer of 2017 as part of Alberta’s craft beer boom. Strings were set up out back to grow their own hops, and inside the taps featured a variety of temptations for any taste.

I grabbed a growler, some six packs, and then hit up their fridge for some jerky from Family Meats just down the street. 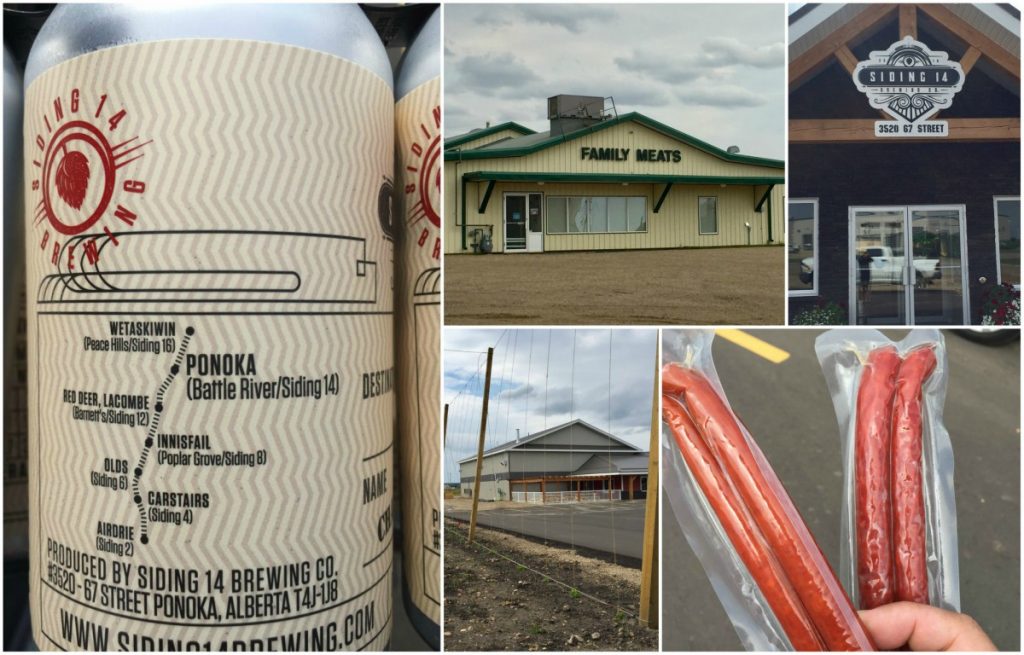 I’ll admit I have yet to pull over into Leduc and Beaumont on my journeys yet. Probably for the same reason I haven’t hit up Olds and Airdrie; they’re too close to the beginning or end of the trip, and I just want to get going or get there.

The bread window at Chartier in Beaumont is really where I want to visit. It is open from Tuesday through Sunday from “noon until whenever we sell out.” I like that kind of attractive mystery.

?Happy Thursday!! Bread lineup: Baguettes, sourdough, pumpkin walnut loaf slices, and toasted coconut & peanut butter cookies! ? Call us at 780-737-3633 to place your order for evening pickup if you can’t make it by during the daytime! #yegfood

If they are sold out, or you need something substantial at the start or end of your trip, Chartier is also a rustic, Quebec French style restaurant with a menu featuring smoked meat sandwiches, charcuterie, and tourtière.

Leduc is home to the Edmonton International Airport. I love exploring airports with kids, staring out the window at the planes taxiing past, and dreaming at the big departure board of just taking off. Soon the Century Mile racetrack and casino will open in the area making for a nice afternoon of pony watching as part of the road trip experience.

That’s what road trips like this are about. A few years ago we discovered Wallace, Idaho, a small mining town buried under a highway bypass. We tooled around the small town for a few nights and realized that this is where the fun of a road trip can be found; in the small towns.

On your next trip between Calgary and Edmonton, plan on taking 5, 6, or 7 hours to get there. Stop for some snacks, sweets, or suds. Wander a small town you’ve never been to before, take the side roads, and take what is normally a dead straight, dead boring drive, and turn it into something worth doing.